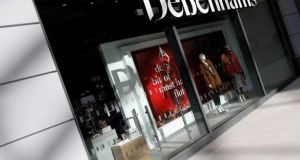 The move by UK chain Debenhams to seek protection from creditors will not hit its stores in the Republic, the company said on Monday.

The department store group confirmed that it intended putting its UK business in administration to counter possible legal action that could force it into liquidation. A spokeswoman confirmed that Debenhams stores in the Republic would “not be affected” by the move. However, its outlets in Northern Ireland are included.

In the Republic, the group has shops in Cork, Dublin, Galway, Kerry, Limerick and Waterford, all of which are closed to comply with the Government shut-down of non-essential retailers as a Covid-19 measure.

Debenhams pointed out in a statement that Irish staff were on “furlough” under the Government’s pandemic scheme, which pays those out of work as a result of the crisis €350 a week. The group employs about 1,500 people in the Republic.

The troubled group said it would appoint an administrator to protect it against possible legal action by creditors while its 142 UK stores remained shut during the coronavirus lock down.

Current management will stay in place but act under the administrator’s control and direction, Debenhams added.

Under UK law, administration gives companies who fear they are unable to pay their debts protection from creditors. They normally appoint an insolvency expert whose legal duty is to rescue the business or get the best result possible.

Lenders took control of Debenhams, once Britain’s biggest department store chain, last April in an effort to keep it open.

Debenhams said that its lenders continued to support the chain and would fund the administration. The group filed a notice of intent to seek administration on Monday, the first step in the process. It also appointed Geoff Rowley and Alastair Massey of FRP Advisory to advise it.

“Debenhams continues to trade online across the UK, Ireland and Denmark, in line with government guidelines, while the lockdown continues,” the chain said.

It continues to communicate with workers in the UK, most of whom are paid under that jurisdiction’s coronavirus scheme.

Debenhams pledged that payments to suppliers that provide goods and services during the administration would be unaffected.

“The group is preparing to resume trading once government restrictions are lifted,” it said.

Stefaan Vansteenkist, Debenhams chief executive, said that the company was going into administration to protect its workers and business so it could resume trading from its stores once government restrictions were lifted.

“We are working with a group of highly supportive owners and lenders and anticipate that additional funding will be made available to bridge us through the current crisis period,” he said.

Consumer media revenue down a third in April at Daily Mail owner 08:54
GSK to produce 1bn doses of coronavirus vaccine booster in 2021 08:42
CNOOC will not exercise rights to buy Tullow stake in Uganda fields 08:38
Hong Kong stocks fall amid concerns over possible US sanctions 07:49
EasyJet, American Airlines to cut 30% of staff amid coronavirus disruption 07:31

1 Ross O’Carroll Kelly column 'not racist towards English people'
2 Irish economy to contract by 12%, ESRI forecasts
3 Brown Thomas and Arnotts shoppers will be able to book time slots for entry
4 Beware of the rush to get back to normal business amid Covid-19
5 What is in the EU’s €750bn recovery plan and how will it affect Ireland?
6 GSK to produce 1bn doses of coronavirus vaccine booster in 2021
7 EU needs to rebuild GDPR after only two years
8 ESRI warns of biggest slump ever, Brown Thomas’ plans and Michael O’Leary has a point
9 EasyJet, American Airlines to cut 30% of staff amid coronavirus disruption
10 Cairn Homes seeks permission for 611 apartments on RTÉ site
Real news has value SUBSCRIBE