When it comes to food, we get what we pay for 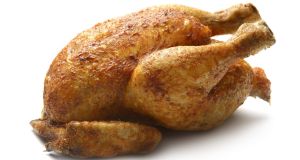 Cheap chicken may be tempting, but it is simply not possible to produce a chicken for the equivalent cost of 10 minutes of labour at the minimum wage.

The relationship between food and its consumers is a complex one. Forces that have shaped the evolution of the global food industry include the rising awareness of health issues, an increasing demand for convenience and an escalating expectation of great taste.

Food is a basic requirement for survival, and it plays a part in how families live and communities bind. Food often is part of what defines nationalities – from the street food of Indonesia to the fried chicken of the southern states of America to long lazy lunches in Roman restaurants.

In Ireland, there is a growing appreciation of good food. We have, as a country, become famous for great beef, world-leading dairy produce and superb seafood. The quality of food in Irish restaurants and pubs has continued to improve. The best Irish specialist foodhalls are now as good as, or better than, those found in London, New York and Paris.

Supermarkets are investing heavily in refreshed and upgraded presentation of an abundance of both imported and local high quality food. Irish food lovers have never had it so good.

There is also an overarching demand that food remain affordable. Not everyone can afford, or has an interest in, Wagyu beef and wild Atlantic salmon. For many food consumers in Ireland, value for money remains a dominant issue.

Competition among producers and retailers keeps a check on escalating prices. The ultimate constraint on undeserved high prices is the consumer, when he or she chooses not to return to an overpriced coffee shop or refuses to become a loyal purchaser of an unjustifiably expensive premium bar of chocolate.

The demand for cheap food can, however, go too far. As supermarkets seek to expand market share through deep price promotion, consumers can become accustomed to buying a chicken at €3, 10 frozen burgers for €2 or fresh veg at just 20 cent a kilo.

It is simply not possible, however, to produce a chicken for the equivalent cost of 10 minutes of labour at the minimum wage.

If Irish consumers are to be guaranteed high quality food, produced at a standard that we all now expect, with a fair margin provided to the farmer, the producer and the retailer, the price paid must reflect those costs.

The obvious risk becomes a reality when standards slip to meet the demand for lower costs. In the worst cases, our health can be compromised. In other cases, there may be no health risk but we are not eating what we believe we have paid for. And sometimes we just feel ripped off.

The most recent cases of food manufacturers seeking to satisfy demand for lower prices have gone too far.

“Shrinkflation” has become a common method used by manufacturers to hit a required price-point as costs increase. In a potentially brand-damaging decision, Toblerone decided to offer a specially reduced-cost bar (sold to one UK discounter) with the spaces widened between the iconic peaks. The 400g bar became just 360g yet the price stayed the same, offering less chocolate even though the packaging remained the same size.

Under pressure to achieve short-term goals, sometimes managers take decisions that do huge damage to the brands they are paid to protect. Toblerone is owned by Mondelez, which also owns Cadbury.

Less dramatic, but probably similarly brand-damaging in the long run, is the common practice by food manufacturers of “re-engineering” their foods in an effort to enhance margins or minimise price increases. Shaving off just a little of the chocolate on a biscuit or using a cheaper substitute ingredient is tempting for a manager who is judged on achieving this year’s profits targets.

When such product changes are researched among consumers, it is not unusual for the feedback to be: “I can’t tell the difference.”

And so, another slice is taken off the notional salami, ready for another unnoticeable adjustment in a year or two. Eventually the salami is visibly shorter, despite the robustness of the market research that supported each step along the way.

The silver lining to this cloud, hidden among these appalling and unnecessary compromises, is a great opportunity for better food businesses to refuse to compromise on the integrity of their food, setting and maintaining standards that anyone who cares about the food they consume would expect.

When an entire category of food is “re-engineered” over decades of cost saving, opportunities exist for some food producers to go back to basics, use good local ingredients and select suppliers with genuine sustainable credentials. Consumers who care about food can recognise such great value for their money.

We get what we pay for. The savings achieved by buying that €3 whole chicken will be exceeded by “real costs”: the lack of nutrition and pleasure, and the damage to the sustainability of farming and production. We will all share that cost in the longer term.

US treasury secretary Mnuchin expects next China trade talks in ‘near future’ 20:53
Davos closes with US signalling hope on China trade talks 20:53
Explorer Petrel gets wider injunction to block sale of shares 20:33
Council tells Johnny Ronan firm to keep the noise down at D4 Embassy venue 20:29
European shares up as investors bet on economic uplift in 2020 20:08