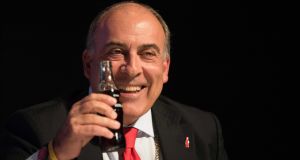 Coca Cola CEO Muhtar Kent: he will step aside in May

Coca-Cola has said Muhtar Kent will step aside as chief executive in May, after nine years at the helm, and be replaced by company veteran James Quincey, a widely anticipated move that comes as the company tries to reduce dependence on its mainstay sugary carbonated drinks.

Mr Kent will continue as chairman of Coca-Cola’s board.

Mr Quincey joined Coke in 1996, and became chief operating officer (COO) in August 2015. His appointment as CEO was given a vote of confidence by Warren Buffett, CEO of Berkshire Hathaway, which is Coke’s largest shareholder.

“I know James and like him, and believe the company has made a smart investment in its future with his selection,” Mr Buffett said in a statement.

Mr Quincey is credited with several recent changes at Coke, including introducing smaller-sized beverage bottles to boost profits and driving the reduction of sugar levels in its drinks.

“This succession was widely expected, and has been ever since James Quincey was appointed COO. Quincey is well regarded and, at 51, has many years ahead of him,” said Société Générale analyst Andrew Holland.

The company’s shares were up 2 per cent at $41.83 in morning trading Friday.

Since Mr Kent took over as CEO in July 2008, Coke’s sales have increased by about 39 per cent, while the company’s shares have surged 61 per cent.

However, Coke’s sales have fallen in the last three years as the company battled falling demand for sugary carbonated drinks and pressure from health experts and governments blaming sugary drinks for rising obesity levels.

To counter the sales drop, the company is building its non-carbonated drinks portfolio, cutting costs by selling its bottling operations and stepping up efforts to reduce sugar in its beverages.

1 Corona beer firm reeling after 8% slide due to coronavirus
2 Bank leaked my loan request to family who tried to rip me off
3 Irish companies restrict travel over coronavirus fears
4 Life as a Facebook moderator: ‘People are awful. This is what my job has taught me’
5 Suspicions rife as key Brexit trade talks begin in Brussels
6 Artificial intelligence may be more humane than people
7 We have little chance of building enough homes to meet election promises
8 Coronavirus: Iseq down 11% in five days as global sell-off is worst week since 2008 crisis
9 Digicel plots network-sharing deal amid ‘tight’ cash levels
10 Rolls-Royce surges on hopes of solution to Boeing 787 engine glitches
Real news has value SUBSCRIBE