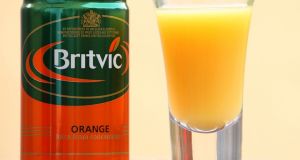 Britvic Ireland has reported a 9.4 per cent jump in full-year revenue to £131.7 million (€154.6m), marking six consecutive quarters of growth.

The soft drinks company said its Ballygowan brand was continuing to outperform the market, and had contributed more growth to the Irish soft drinks market than any other brand. Ballygowan now commands 25 per cent of the water market here.

Analysts have speculated that a tax on sugar-sweetened drinks, to be introduced in Ireland in 2018, may damage Britvic sales.

The company, which produces MiWadi, Club Zero and Drench, said 60 per cent of its Irish sales were now in the low and no sugar segment of the market.

Managing director of Britvic Ireland Kevin Donnelly said the company had been reformulating its core brands since 2011, taking down sugar levels in response to changing consumer preferences.

He said the company was well prepared for the introduction of an Irish sugar tax, noting that if the government here opts for a similar tax to that in the UK, almost two-thirds of its drinks would be exempt.

Mr Donnelly said Britvic’s new MiWadi 0% brand already commanded 6 per cent of the dilute market after its launch 14 months ago, and was the first soft drink brand to receive support and approval from Diabetes Ireland.

The Britvic group as a whole reported a 10.1 per cent increase in annual revenue to £1.4 billion, while after-tax profits increased 10.3 per cent to £114.5 million.

“Britvic has delivered another strong set of results in challenging market conditions,” chief executive Simon Litherland said. “In our core markets we continued to take market share, with a particularly strong carbonates performance.

“Internationally we have had an excellent first year in Brazil, and Fruit Shoot continued to grow in France, [in] the US with the launch of multipack, and latterly in Brazil following its recent launch in Sao Paulo.

“We are confident we will mitigate inflationary input costs through a combination of revenue-management activities and internal cost-saving initiatives,” said Mr Litherland.