Fyffes agrees to acquisition by Sumitomo for €751 million

Deal will see each shareholder of Irish fruit distributor receive €2.25 per ordinary share 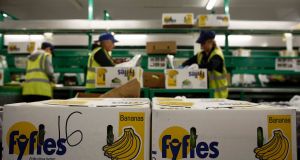 Irish fruit distributor Fyffes is set to be acquired by Tokyo-headquartered Sumitomo Corporation for €751 million. The two companies have reached agreement following a cash offer by Sumitomo, which will see each Fyffes shareholder receiving €2.23 per ordinary share. The deal combines the largest banana distributors in Europe and Asia and looks set to win shareholder approval.

The McCann family, who have run the fruit company for many years, are among the biggest shareholders with their investment vehicle holding more than 12 per cent. This values the McCann stake at approximately €87.5 million.

The other major shareholder is a family trust controlled by a US family, the Zuckers, who own roughly the same amount of shares.

The offer price is a premium of close to 50 per cent from Thursday’s closing price. Goodbody stockbrokers said in a note to clients that, with almost 30 per cent of Fyffes shareholders already committed to accept the offer, the deal looks set to be completed smoothly. The deal will have to be formally approved by shareholders at an extraordinary general meeting.

Fyffes was close to a merger with Chiquita in 2014, in a move which would have created the world’s largest fruit company, but the deal fell apart.

Chairman David McCann said the Sumitomo deal crystallised the substantial value created in recent years through the various strategic developments and the strong operating performance of the company. “Our employees, customers, suppliers and joint venture partners will benefit from Fyffes being part of an enlarged group with greater scale, reach and resources to broaden and accelerate delivery of Fyffes’s strategic objectives.”

Fyffes emerged from a 1986 acquisition by the Fruit Importers of Ireland (FII) company – founded and run by the McCann family – with Fyffes, then a British company. The company, whose original business was based on bananas, spun off its fresh produce business into a separate company, Total Produce, in 2007.

Hirohiko Imura, representative director of the managing executive officer for Sumitomo, said Sumitomo Corporation had long admired Fyffes for its outstanding track record and market leading position. “We are delighted that the Fyffes directors have unanimously agreed to recommend our offer to shareholders,” he said. “We believe that our offer represents a great reward for Fyffes shareholders.”

Fyffes is headquartered in Dublin with annual turnover in excess of €1.2 billion.

The Sumitomo Corporation group consists of more than 800 companies and more than 65,000 personnel. It has a market capitalisation of approximately $15 billion.

1 Irish company paid €1.2m a year by collapsed Blumenthal-linked Australian restaurant
2 Why bosses should not be afraid of speaking out on Instagram
3 Hugo MacNeill steps back from Goldman Sachs role
4 Hammerson appoints lead for move into housing
5 Should AIB compensate me for upsetting letter on arrears?
6 Irish economy to grow by 3.4% this year, predicts EY
7 ‘Germans are very efficient and reliable. Cancelling is alien to them’
8 Setback for Tullow Oil as it plugs a well off the coast of Peru
9 Facebook founder reiterates need for greater regulation of big tech
10 Chris Johns: The Johnson administration will spend, and needs a quiet Treasury
Real news has value SUBSCRIBE