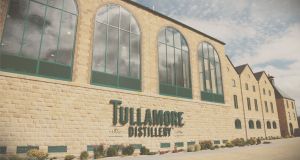 Whiskey production returned to Tullamore for the first time in 60 years in 2014, when William Grant opened a €35 million distillery on the outskirts of the town to produce Tullamore Dew

Losses at drinks group William Grant and Son’s Irish subsidiary soared last year after the ending of a bottling contract with Campari and continued investment in its Tullamore site. William Grant, which acquired Tullamore Dew, along with three other spirits, from drinks group C&C in 2010 for €300 million, saw pretax losses rise to €5.6 million last year, from €1.2 million in 2014, according to newly filed accounts.

William Grant and Sons Irish Manufacturing Limited recorded turnover of €29.1 million in 2015, up from €28.6 million a year earlier. The company employed 64 people, as against 49 in 2014, with staff costs rising to €3.3 million compared to €2.9 million in the previous year.

The Scottish drinks group announced plans to close its drinks bottling manufacturing facility in Clonmel last year with the loss of up to 50 jobs. William Grant is transferring the bottling operation to its distillery site in Tullamore, with production at the Co Tipperary plant due to cease in September 2017.

The move coincides with the ending of an agreement earlier this year with Campari to produce Carolans and Irish Mist. William Grant sold the liqueur brands to Gruppo Campari for €129 million in 2010 but continued to provide blending and bottling for the liqueurs until last September.

Whiskey production returned to Tullamore for the first time in 60 years in 2014 when William Grant opened a €35 million distillery on the outskirts of the town to produce Tullamore Dew, the second biggest Irish whiskey brand after Jameson.

The first bottles from the Tullamore plant will not be available for sale until 2018. Before the opening of the facility, William Grant sourced whiskey for Tullamore Dew from a number of rivals, including the Pernod Ricard subsidiary Irish Distillers.