Fans of Toblerone chocolate bars complain about a cost-cutting move to space out the distinctive jagged peaks on versions of the Swiss favourite. Video: Reuters 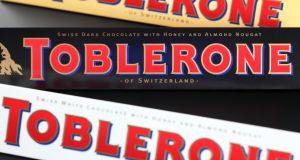 Gaps in the market: Toblerone drew the ire of customers by increasing the spacing between its chocolate pyramids. Photograph: iStock

Within hours of the Brexit vote in June, as sterling fell precipitously, Gavin Darby, chief executive of Premier Foods in the UK, had summoned his director of procurement. “I said to him, let’s substitute our suppliers from outside the UK with ones inside,” says Darby, whose company produces Mr Kipling cakes, Sharwood sauces and Ambrosia puddings.

Darby thought immediately of one UK supplier that had recently lost out on a Premier contract to a competitor based in a Benelux country. “Now, we’re saying – ‘hey, here’s your opportunity to get the business back’,” he says.

Switching suppliers is neither quick nor easy, so most consumer brands have tended to shy away from such a drastic measure, even during bouts of inflation and currency swings. Customers, they reasoned, would know that rising costs mean higher prices – or, at worst, would acquiesce when they realised that rival brands were becoming more expensive too.

However Darby’s swift decision on the morning of June 24th is being replicated at other UK-based consumer products groups, as executives facing higher costs struggle to maintain their margins without alienating their customers, many of whom are based in Ireland.

Both manufacturers and supermarket chains know from bitter experience that they will be punished by pennypinching shoppers if prices rise too far or too fast. So some food groups are resorting to “shrinkflation”, a device pioneered by American companies in the 1970s to defend profits in an era of stagflation. They surreptitiously reduce pack sizes while keeping the price constant, in hopes of persuading customers to content themselves, often unwittingly, with less bang for their buck.

Last month Toblerone incurred the wrath of chocolate lovers with a conspicuous version of that tactic. It introduced big gaps between its chocolate pyramids to reduce their weight while keeping the packaging intact.

It is not alone, though. Over the past few years, Mars and Snickers bars have become smaller and a six-pack of Cadbury’s Creme Eggs has become a pack of five. Some manufacturers are also promoting multipack bags of sweets and snacks, which appear larger on the shelf but include less food inside,

Another approach involves branding a product as “new” to justify a higher price. Danone, the French producer of Activia yoghurt, recently reduced the size of its low-fat Big Pot from 500g to 450g but kept the same price. The group said the price rise was due to new packaging and a recipe change and said it had been planned before the Brexit vote.

When price rises are unavoidable, brands sometimes try to bring them in incrementally, says José Carlos González-Hurtado, president of international at IRI, the retail consultancy. “For example, you don’t push up prices by 10 per cent but you push them up by 3 per cent, three times over a period of time.”

Creeping price increases are banned in some countries, such as France, where negotiations are yearly, but where they are allowed, González-Hurtado says, “the consumer doesn’t notice this so much”.

These efforts to gloss over price increases come at a time when consumers are starting to worry that food prices will go up, after two years of strong deflation. In the UK, the latest Gfk consumer confidence index published earlier this week fell in November, almost cancelling out gains made in August and September. Analysts say the change was triggered by Unilever’s demand for a 10 per cent price hike on its products.

That sparked a public fight with leading supermarkets and led to products such as the iconic Marmite breakfast spread and Ben and Jerry’s ice cream disappearing briefly from the website of Tesco, the UK’s largest supermarket. In Ireland, the row was spearheaded by SuperValu, which refused to accept Unilever price increases.

Graeme Pitkethly, Unilever’s finance director, blamed higher commodity costs and deflation for price rises in the UK, claiming that “the price increases we are taking in the UK are substantially less than needed to cover our own profitability”.

The biggest grocers though – Tesco, Morrisons, Sainsbury and Asda in the UK, and Tesco and SuperValu here – saw it differently, chastened by their experience of the inflationary bout that followed the financial crisis.

In the UK, from 2008-09, when sterling fell by 30 per cent against the dollar and 25 per cent against the euro, “the big four [supermarkets] acted as a de facto oligopoly,” says Edouard Aubin, analyst at Morgan Stanley. “They had 75 per cent market share. The resulting input cost inflation was almost entirely passed on.”

That proved to be a costly miscalculation, allowing German discounters Aldi and Lidl to storm into the British grocery market and seize a combined 10 per cent market share. The same dynamic has applied in Ireland. As retailers fought back with price cuts, their profit margins have halved in the past three years, according to Martin Deboo, analyst at Jefferies, while big consumer goods companies have broadly maintained theirs.

Now, with the price of palm oil, sugar, wheat and cocoa butter all rising over the past year, grocers are determined not to repeat their mistake. They know consumers now believe that the cost of their shopping carts can go down as well as up – if they shop around.

“We’ve spent two years rebuilding trust, convincing customers we’re not ripping them off,” says a senior executive at a big four supermarket. “No way can we put up prices now. If that’s what suppliers want, we’re going to have a fight.”

For manufacturers, on the other hand, rising costs can be an opportunity. Britvic this week reported its first like-for-like increase in annual revenues in two years – up a modest 0.4 per cent – reflecting the ebbing of the deflation of the past few years. The soft drinks group behind the Fruit Shoot and Robinson’s brands said it had recently started negations with retailers but aimed to absorb as much inflation as it could by trying to maximise sales through the instore marketing, promotions, cost-cutting and new variants.

Manufacturers usually give notice of between eight and 12 weeks to retailers about raising prices and tradition has it that prices are not raised in the Christmas period. Executives are accustomed to fraught negotiations between food manufacturers and suppliers. Now, though, the swordplay has a new twist, according to Jeff van der Eems, chairman of Continental Bakeries, the Netherlands-based group and former chief executive of United Biscuits, which makes McVitie’s biscuits and Jacobs crackers.

Retailers “are saying, ‘now show us what you have done to offset that inflation’,” Van der Eems says. “The tension will come from the retailer wanting the supplier to justify price increases and work harder not to pass them on, and suppliers who don’t want to miss this window of opportunity to get some oxygen.” – (Copyright The Financial Times Limited 2016)