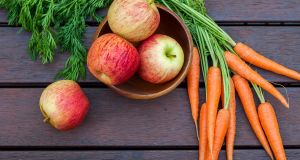 Fresh fruit and vegetable supplier Total Produce has struck a deal to create a new US-listed entity under the Dole brand. Photograph: iStock

Dublin-headquartered Total Produce is to merge with Dole Foods in the US to create the world’s largest fresh fruit and vegetable supply business with $10 billion in sales (€8.2 billion).

If the deal gets the green light from shareholders and regulators, the new entity – Dole Plc – will be double the size of its nearest rival, Del Monte Foods.

The combined company, operating under the Dole brand, will be incorporated in Ireland, with its global headquarters in Dublin, but it will be listed in the US.

It hopes to raise $500-$700 million by way of a public flotation in the US later this year, possibly as early as June.

The move will see Total Produce de-list from the Euronext Dublin and the London Stock Exchange.

Total bought a 45 per cent stake in Dole in 2018, with the remaining 55 per cent owned by Los Angeles-based Castle & Cook.

Total chairman Carl McCann said the 2018 transaction was “a halfway stage... it was never going to be the end position.”

Having multiple stakes in separate entities was “untidy” and a complex sell when it came to investors, he said.

“This will be a very pure, straightforward and much simpler story,” Mr McCann said.

The transaction will simplify the existing structure between the two companies, with the new entity having sales spread 50-50 between North America and Europe, he said. It would also deliver $30-$40 million in synergies–annual cost savings.

On the decision to trade under the Dole brand, Mr McCann said: “If you’re doing a US listing it would be unwise to use any other name . . .why would start off except with a really well known brand name.”

“While Irish customers might not be familiar with the Dole brand, in the US it is the single best fresh produce brand by a mile,” he said.

The bigger entity would also be able to accelerate high-growth products, he said, while noting Dole has a fleet of ships, which could be leveraged by the new business.

The combined business would also have a more diversified mix of products, comprising 50 per cent bananas and 25 per cent fresh vegetables, he said.

He said the capital raise would put the ratio of net debt to earnings – as defined by Ebitda ( earnings before interest, taxes, depreciation, and amortisation) – at a “healthy” multiple of three, he said.

The management teams of Total Produce and Dole will continue to operate the combined business with Total chief executive Rory Byrne and Mr McCann maintaining their existing positions in the new entity.

The deal was described by Davy analysts as “equal part novel as it is value accretive”.