Market Beat: Little hope of any deal until milk price issue is resolved 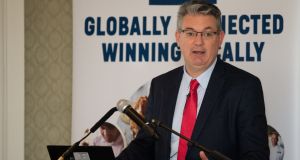 Kerry Group chief Edmond Scanlon was knee-deep in preparations for annual results next week when more than €2 billion was wiped off the company’s market value in less than an hour around midday on Thursday.

A report issued into the Twittersphere by a little-known outfit, called Ontake Research which claimed it was short-selling the stock for good reason, sent the company’s stock down as much 11.5 per cent.

The report raised questions about eight acquisitions made by Kerry Group since 2011 for a total cost of €1 billion, suggesting it had overpaid for some low-yielding assets. It also challenged the profit margin of the group’s key taste and nutrition business.

A company spokesman subsequently issued a statement, saying the thesis was “full of errors, inaccuracies and incorrect deductions”.

The sharp sell-off of the shares reflect the febrile nature of equity markets in recent weeks, which, paradoxically, has been fuelled by the activities of a mob of pajama traders that have taken aim at short-sellers of certain stocks – most notably US video games retailer GameStop.

Strangely, the report did not contain the name of an author, nor provide contact details. And within a matter of hours the Ontake Research website was taken down and remains so. Its only other piece of research (before the site was pulled) was a negative piece on a German listed private equity company called Aurelius from early 2020. Germany’s financial regulator, BaFin, found Ontake in breach of securities trading laws a few months later, following a complaint from Aurelius.

There has been no sign of the army of Reddit discussion forum followers that have taken rushed to the defence of GameStop and other “shorted” stocks of late swarming around Kerry Group in recent days.

However, analysts in a number of brokerages and investment banks have stepped in, helping the stock to recover two-thirds of the ground ceded on Thursday.

Analysts in US investment bank Jeffries said the Ontake piece echoed comments in a June 2019 report from another activist firm that was betting against the stock, called Shadowfall Capital.

“Kerry’s acquisition strategy has been stable for a number of years and we think is well appreciated by the market; they invest amounts roughly equal to their free cash flow into multiple smaller assets, with the primary focus being to acquire competencies or capabilities that are complementary to Kerry Group’s solutions-based model,” Jefferies said.

“This often means acquiring companies with promising technologies, but with little to no profit. The fact that Kerry are able to implement these technologies/competencies (albeit with some level of integration spend) and continue to grow volumes and margins organically, is testament to their model.”

Goodbody Stockbrokers said that it believes “many of the issues raised in the report are unfounded and carry little weight to the investment case”.

Still, it said that ongoing Covid-19 lockdowns internationally and a weaker dollar will slow any recovery – following a forecast 8-11 per cent slump in 2020 profits, driven by a drop in food-service sales, spanning fast-food restaurant chains to contract caterers.

Barclays said the fact that Kerry Group has been able to deliver compound annual earnings growth of 8 per cent a year in the decade 2019 “is pretty compelling evidence” that its deals activity has helped create shareholder value.

However, it noted that the group has had a mixed track record of converting earnings into cash flow compared to its peers, partly due to lumpy mergers and acquisitions restructuring costs.

“We would suggest that yesterday’s share price underperformance should highlight the urgency and importance for management to communicate the group’s ability to sustainably improve cash conversion,” it said. Scanlon and his chief financial officer, Marguerite Larkin, are likely to face questions on this when Kerry Group reports results on Tuesday.

One item in the Ontake report that won’t have gone unnoticed by milk suppliers to Kerry Group is the figure it has put on what’s owed to them as a result of a milk price dispute dating back to 2015.

The anonymous authors of the piece estimate that an arbitration ruling between both sides leaves Kerry Group owing 3,000-odd farmers – who count among shareholders in Kerry Co-Op, which owns 12.3 per cent of the publicly quoted company – some €294 million for failing to meet a commitment to paying a market leading milk price.

The figure has caused some head scratching, as it’s generally estimated that the shortfall has amounted to between €20 million and €25 million a year since 2015. It appears, however, that Ontake has factored in future liabilities on the basis that the supply agreements have five-year notice periods.

This may complicate discussions between Kerry Co-op and Kerry Group on forming a dairy business joint venture.

The Co-op, whose shareholders also include a large number of former suppliers and parties that would have acquired stock on a grey market, has been in talks for some months on taking a controlling 60 per cent stake in the plc’s manufacturing facilities and brands including Dairygold, Charleville and Kerry Low-Low spreads.

Kerry Group opened its books to the Co-op in recent weeks for due diligence, after the latter was talked up to placing an indicative bid on a controlling stake that valued the entire venture at €800 million. The discussions had been centring on a €640 million valuation, before it emerged that an unnamed overseas player was also circling the business.

There is little hope of farmers allowing the Co-op to sign up to any deal until the milk price issue is resolved.

9 So you want to invest in the stock market: what will it cost?