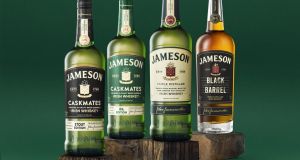 Jameson sales during the second half of 2020 were up 12% in Britain and up 7% in the US, Jameson’s biggest market

Sales of Jameson rose 3 per cent during the second half of 2020, with volume growth recorded in key markets such as the US.

Irish Distillers chief executive Conor McQuaid hailed a resilient performance from the brand during a challenging environment in what marked the group’s first fiscal half.

“Jameson sold 4.75 million cases, which was its highest ever volumes in the first half of the year. This was aided by sales of over two million cases in the US for the second year in a row, but was also buoyed by growth in other key markets including the UK, Russia and Ireland. The brand also saw continued growth in emerging markets including Nigeria, India and Brazil,” he said.

Sales of Jameson variant Black Barrel were up 31 per cent globally versus the same period a year earlier.

Flavoured ready-to-drink variants, such as cans of Jameson and ginger, jumped 42 per cent year-on-year on the back of strong growth in Australia, New Zealand, Britain and Canada.

“While our results reflect increased demand in the off-trade outlets, the pandemic continues to present challenging business conditions for our partners in hospitality, the on-trade and global travel retail,” said Mr McQuaid.

“We understand that it will take some time for those sectors to recover and reach pre-pandemic growth levels, but we are optimistic for the future and confident that they will rebound and emerge even stronger than before.”

Irish Distillers’s parent Pernod Ricard said it expected organic sales growth in its second half to “more than offset” the 3.9 per cent decline in its first

Chief executive Alexandre Ricard would not comment on the market consensus which targets organic sales growth of 4.8 per cent for the full year, saying duty-free sales would remain under strong pressure during the year and Covid-19 restrictions would continue to disrupt business in bars and restaurants in the second half in many markets.