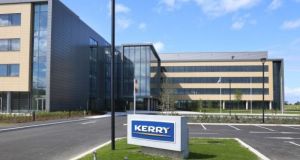 Kerry Group said its business volumes returned to growth in the final quarter of 2020.

The chief executive of Kerry Group has defended the company’s acquisition strategy, insisting it “has generated significant shareholder value”.

Edmond Scanlon was speaking after the launch of the food company’s full-year results and in the wake of a report last week from short-seller Ontake Research, criticising the firm’s acquisition strategy.

Kerry dismissed the report as full of errors and inaccuracies. However it triggered a significant slide in the company’s share price – almost 12 per cent at one point.

Mr Scanlon said investors had actively encouraged and supported the company on its acquisition strategy.

“The acquisitions that you’ve seen in the last year and the acquisition that we announced yesterday [the company bought Spanish probiotic group Biosearch Life] will continue to be part of our strategy,” he said.

Mr Scanlon was speaking after Kerry published an update on its business performance, which pointed to a decline in revenue and profit last year – the impact of Covid-19 on the global foodservice industry – but a return to growth in the final quarter of the year.

In preliminary results for 2020, the Irish-listed group said revenue was down 4 per cent at €7 billion while its trading profit fell to €797 million from €903 million in 2019.

But there was cause for optimism, with volumes regaining ground over the year and rising 2.2 per cent in the fourth quarter, driven by a recovery in foodservice across Asia, where lockdown measures have been less severe.

“We were delighted to be able to transition into growth in Q4, both in the taste nutrition business and in the consumer foods business,” Mr Scanlon said.

Mr Scanlon said Covid had precipitated a period of consolidation with the bigger players amassing bigger market shares. About 75 per cent of Kerry’s business is plugged into big global food companies.

The company declined to provide a full-year earnings guidance with its latest set of numbers given the level of volatility associated with the pandemic, but Mr Scanlon said the plan was resume earnings forecasts in the second quarter.

On speculation that Kerry plans to sell-off its dairy and consumer foods division, which now only accounts for just 10 per cent of the business, Mr Scanlon said the company was planning a strategic review of its dairy business in Ireland and Britain.

The review would consider dairy production and consumer food assets and could result in a transaction, he said.

Goodbody Stockbrokers recently valued the assets at around €800 million while pinpointing Kerry Co-op as the most likely purchaser of a stake in any new venture.

Mr Scanlon said it had been a “truly unique” year due to the ongoing pandemic, but noted a number of distinctions in Kerry’s business performance.

“Sustained strong growth was achieved in the retail channel, primarily through growth in authentic cooking, plant-based offerings and health and wellness products. Performance in our foodservice channel was most significantly impacted in the second quarter, as the introduction of restrictions affected our customers’ operations,” he said.