Supermac’s in five year deal with Galway GAA for €2m 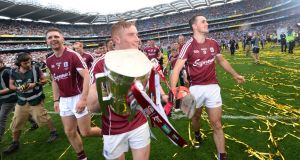 Supermac’s has renewed its sponsorship of Galway GAA for a further five years in a deal understood to be worth €2 million. Photograph: Dara Mac Donaill

Supermac’s has renewed its sponsorship of Galway GAA for a further five years in a deal understood to be worth €2 million.

The fast-food group began sponsoring Galway hurling in 1991, subsequently becoming the sponsor for all Galway football and hurling.

This deal means Supermac’s will sponsor the county’s adult and youth intercounty teams in football and hurling until 2022.

“Galway GAA is delighted that an agreement has been reached and that Supermac’s will continue to be the main and exclusive sponsor of all Galway GAA Inter-County Teams. This renewed sponsorship will ensure that Galway Inter-County Teams will be provided with the all of the resources necessary to compete at the highest levels of all National competitions in the years ahead,” said Galway county board chairman Pat Kearney.

Pat McDonagh, the managing director of Supermac’s, said: “Our sponsorship of the county teams is an important part of our relationship with the GAA but equally as important for us is the sponsorship we provide at local club level.

“It is the connection with supporters via club and county that makes the GAA the special organisation that it is.”

Asked whether he considered taking over the sponsorship deal for Dublin, recently renewed by AIG, Mr McDonagh said: “Insurance companies are making too much money at the moment, I couldn’t compete with them.”

Mr McDonagh’s empire includes 107 Supermac’s outlets – 34 of them operated by the company with the rest franchised – as well as the Killeshin hotel in Laois, Castletroy Park hotel in Limerick, the Charleville Park in Cork and Lough Rea hotel in Galway.

He also runs motorway service stations and owns the Irish master franchise for Papa John’s US fast food brand, as well as a chain of 10 pubs in the midwestern US called Claddagh Irish Pubs.

1 Boeing identifies new software flaw in grounded 737 Max
2 Dublin housebuilder records €11m gain after striking deal with bankers
3 Barclays to cut 100 senior roles as lender seeks to rein in costs
4 Seán FitzPatrick’s new Greystones home plan runs into privacy issues
5 Latecomer to science brings a woman’s insight to cure most common health issue
6 Slack lease the lure as ESB seeks €168m for Fitzwilliam 28
7 How to . . . move (almost) everything to your new phone
8 Construction body calls for loan scheme to help first-time buyers
9 ‘Life in Vilnius reminds me of Ireland in the 1990s’
10 The Irish economy is thriving but if you’re not feeling it – here’s why
Real news has value SUBSCRIBE