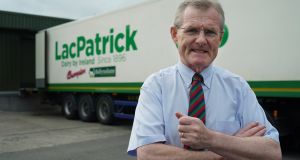 Troubled dairy co-op LacPatrick will send details of the business to potential bidders this week, it is understood.

Monaghan-headquartered LacPatrick said last month that it would seek a strategic partner for the business, which has been under pressure since the autumn in the face of falling milk prices.

It has emerged that the co-op will send documents this week to four rivals, Glanbia, Lakelands, Aurivo and Dale Farm, which have all expressed interest in bidding for LacPatrick.

LacPatrick did not comment on the latest stage of the sale on the basis that it was “engaged in a confidential commercial process”.

The four bidders emerged shortly after the co-op’s chairman, Andrew McConkey, announced that LacPatrick was seeking “partnerships, joint ventures or mergers or other other opportunities”.

Although it has not commented, Cavan-based Lakelands, which has a strong balance sheet, is understood to be a potential bidder for LacPatrick and its 600 million-litre milk pool.

Industry sources see it as a natural front-runner, particularly on the basis that LacPatrick’s and Lakelands’ territories overlap in some places.

Lakelands previously attempted a merger with Co Derry-based co-op Ballyrashane, which went on to merge with Monaghan Town to form LacPatrick in 2015.

Belfast-based Dale Farm, ranked as the UK’s biggest co-op, is believed to have contacted LacPatrick shortly after Mr McConkey made his statement.

Much of LacPatrick’s milk comes from farms north of the Border, a factor that could make the Belfast player an attractive suitor from the co-op’s members’ point of view.

Dale Farm did not confirm that it contacted its rival, but its chief executive Nick Whelan, said following Mr McConkey’s announcement that “we have an interest in these developments”.

LacPatrick cut the price it paid farmers for March milk deliveries by two pence sterling to 25p a litre in Northern Ireland and by 2.5 cent to 30.25 cent a litre in the Republic, blaming a weak market.

LacPatrick increased borrowing to invest in its business, including building a drier for powdered milk manufacture at Artigarvan, Co Tyrone, which cost €40 million. Its main lender is Danske Bank.

LacPatrick trades on both sides of the Border, buying five out of every six litres of milk that it processes from farmers in Northern Ireland.

1 Lockdown exit: How can Irish economy reopen without big health risks?
2 I want to change my will quickly in case I fall ill. Do I need a lawyer?
3 Property market has not felt full impact of Covid-19, warns Sherry FitzGerald
4 Toast believed to have cut its Dublin staff by 50%
5 EU ministers fail to agree virus economic rescue in all-night talks
6 Finance ministers gather as fears grow even the future of the euro zone is at risk
7 Fierce backlash to Dutch hard line on eurobonds
8 Brighten up your stay at home experience with artwork from Behance
9 Q&A: Where do we stand on mortgage holidays and payment breaks?
10 Aldi offers priority access for front-line workers at its Irish shops
Real news has value SUBSCRIBE