Inside Track: Maud Black of Black’s Brewery and Distillery, Kinsale

‘I gave Sam a beer making kit for Valentine’s Day. What started as a hobby quickly developed into an obsession.’ 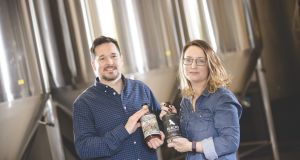 Sam and Maud Black of Black’s Brewery and Distillery

Husband and wife team, Maud and Sam Black, enjoy pushing the boundaries of taste and flavour at their combined micro-brewery and distillery in Kinsale, Co Cork.

What is special about your business?

We are the first co-located micro-brewery and distillery in Ireland and the first or last – depending on where you start – on the Wild Atlantic Way. This crossover between brewery and distillery is unique and gives us the option to age our beers in spirit barrels and vice versa to improve the depth of flavour. We recently made a stout aged in our own rum barrels.

We also do a lot of small batches of unusual beers to keep our customers interested such as our Solero Sour beer which balances the beer’s sourness with passion fruit and mango puree.

The craft brewery sector has become very crowded. What sets your business apart?

We started in 2013 before the market became too crowded. Since then we have differentiated ourselves by developing a core range of six signature beers including our American style Kinsale pale ale, which uses two varieties of hops to provide a citrus and tropical fruits flavour. This beer just won a gold medal and the award for best pale ale in Ireland at the recent Alltech Beer Cup in Dublin.

Another favourite with our customers is our World’s End Chocolate Vanilla Imperial stout. It has a deep chocolate hit from the cocoa bean husks used in the mash which are sourced from a local chocolate maker.

On the spirits side, we produce an Irish gin and some more unusual products such as Moonshine, which is an American version of poitín using corn as well as barley.

What got you into this business in the first place?

I gave Sam a beer making kit for Valentine’s Day. What started as a hobby quickly developed into an obsession.

What have been your biggest challenges?

Managing cash flow, especially in the first quarter of the year as this is a period of lower consumption and lower tourist numbers. We sell more in April than January to March combined. Growth in export sales is helping, however, as the French and Italians drink more beer in the early part of the year.

What has been your biggest success?

Growing our business to the point where we employ six people.

What advice would you give someone starting a business?

Make sure your idea is viable and constantly watch your cash flow. Take the advice and support offered by agencies, such as LEOs, Enterprise Ireland and Bord Bia. Be smart with your capital. Don’t rush out and buy things you don’t really need like a shiny new van. Product design is really important. Ask people for comments and don’t take it personally if they criticise. Focus on constantly achieving quality and consistency in your product.

Do you have business hero or heroine?

Colette Twomey, founder of Clonakilty Black Pudding and Sausage Company. I was brought up on a farm not far from Clon, so I’ve seen how the company has developed over the years. The story of how she has grown the business into an international success is inspirational.

What could the Government do to help an SME like yours?

Introduce a craft beer bill, that would allow us to sell products to visitors. We couldn’t afford to buy a pub licence that would allow us to do this under existing legislation. I hate having to tell tourists they can’t buy a bottle to take home. The law currently only allows them to purchase a minimum of 40 bottles which is far too much for most local people never mind tourists.

In your experience are the banks back lending to SMEs?

Yes, if you approach them with a realistic business plan.

Underestimating the working capital requirements when we started. Without a credit history, we had to pay for everything in advance, while our customers expected a minimum of 30 days’ credit. In most cases payment took even longer so we got caught in the middle.

What is the most frustrating part of running a small business?

Not enough hours in the day to achieve all the things we want to and finding it hard to switch off from work at home.

What makes it all worthwhile?

Seeing our products on the shelves, receiving positive feedback from our customers, looking at how the company has grown and the fact that we are now exporting to seven countries.

You’ve just launched an Irish rum which is unusual. Why rum?

Rum is Sam’s favourite spirit and we have been working on it since we started. However, it takes specialised knowledge and equipment to produce and time in oak casks to mature. This is the first ever Irish rum actually produced in Ireland rather than a repackaged imported product.

It’s worth an awful lot to us but I’m not sure what price tag to put on that. Would we sell it? A lot would depend on who was asking and if they were the right fit for the business.