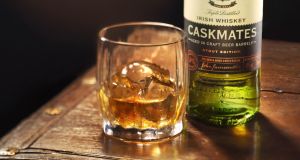 No financial details have been disclosed but industry insiders described it as a “multimillion-euro deal”.

The primary objective of the purchase of the brewer is to ensure a long-term beer supply to sustain the continued growth of Jameson Caskmates, a product introduced by Irish Distillers on a trial basis in 2014.

Caskmates is a variation of the flagship whiskey that is aged in craft beer-seasoned barrels. Sales of the product jumped 110 per cent in volume terms and 103 per cent in the 12 months to June 2017.

Eight Degrees was founded by Scott Baigent and Cam Wallace in Mitchelstown in 2010 and is one of the country’s most successful craft beer producers. The company employs 10 people, all of whom are to stay on following the transaction.

The brewer’s brands include Barefoot Bohemian, The Full Irish and Amber Ella.

Irish Distillers said the success of Caskmates had made the acquisition necessary.

“Jameson Caskmates has had exceptional success since its launch, selling almost 200,000 cases into more than 40 markets last year. With this success comes a need to plan for the future and that’s what led to this exciting deal with Cam and Scott in Eight Degrees Brewing. We’re looking forward to working with their team to continue to grow Jameson Caskmates on the world stage from Midleton and Mitchelstown,” said production director Tommy Keane.

Prior to the acquisition Irish Distillers had an arrangement with Franciscan Well and its parent company Molson Coors to supply beer for the production of Jameson Caskmates. However, the drinks giant has found it difficult to source sufficient volumes in recent years.

A spokesman for Irish Distillers said it had enjoyed a good working relationship with the brewers at Franciscan Well and expected to continue to work together with the team on future projects and initiatives.

Under the deal it has agreed with Irish Distillers, the Eight Degrees team will continue to work on new beers.

“When we set up Eight Degrees Brewing in Mitchelstown in 2010 we wanted to brew naturally adventurous, great-tasting beers that were more exciting and innovative than anything else in the market. Becoming part of the Irish Distillers family means that we have the long-term capabilities to continue on this mission as well as being part of the very exciting Jameson Caskmates story,” the founders said in a statement.

Jameson is one of Ireland’s most recognised brands worldwide, enjoying almost 30 years of strong growth with 6.5 million cases sold last year, up from 500,000 cases during the mid-1990s.

1 Ireland has fifth-largest number of billionaires per capita in the world, says Oxfam
2 State-backed Finance Ireland weighs stock market flotation in 2020
3 Companies should not use the climate crisis as a scapegoat
4 Irish billionaires, Hogan goes to Davos, PTSB’s CEO race and Ibec’s election wishlist
5 Azure seeks to protect Ireland against medicine shortage
6 Irish rents see second-highest increase in the EU since 2007
7 ‘The only time I saved money was some coins in my first piggy bank’
8 Phil Hogan to address business leaders at IDA event at Davos
9 Inbreeding poses major threat to Ireland’s thoroughbred horse sector
10 Reddit bans misleading deepfakes ahead of US presidential election
Real news has value SUBSCRIBE