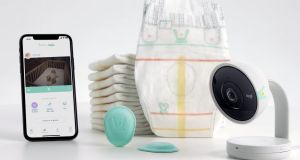 Google’s life sciences sister company Verily has created a baby-monitoring system based around “smart nappies”, working with Procter & Gamble’s Pampers to use sensors, software and video to surveil when infants sleep, wee and poo.

Parents will be able to raise “quantified babies”, attaching an activity sensor to the child’s nappy, which feeds data on when a nappy is wet and on a baby’s sleep time to an app that charts daily and weekly routines to show its development.

P&G’s Lumi system, set to launch in the US this autumn, also includes a video monitor made by consumer electronics company Logitech, so that parents can watch their baby through the app anywhere in the world.

The companies say individual babies’ data will be for parents’ eyes only, but they will use aggregate data to improve the product and explore new areas where parents could benefit from nudges to better take care of their children.

Privacy activists, however, raised the alarm. “Parents may find this new system convenient, but not recognise the serious risks to their privacy,” said Jeffrey Chester, executive director at the Center for Digital Democracy.

Dr Jessica Mega, Verily’s chief medical and scientific officer, said the company used its expertise in software and sensors to inform their work on the product. In particular, she said, Verily had learnt from building its Onduo diabetes management platform.

Dr Mega said Verily hopes to help people making decisions every day about managing their health. “This idea of surfacing timely, relevant and helpful insights is core to what we do at Verily,” she said.

Verily, a unit of Alphabet spun out of Google X in 2015, is developing platforms and tools to organise healthcare information in a myriad of settings, from transforming clinical trials to a partnership with Johnson & Johnson on robotic surgery. Last month, Verily opened OneFifteen, a collaboration with local health services in Ohio to create a state-of-the-art opioid addiction treatment centre.

Millennials are putting off starting families, and the number of babies born in 2018 in the US was the lowest in more than three decades

Omer Sher, who runs Pampers’ start-up unit, described the new product as “a major innovation in the baby care space”. While a new generation of gadgets is allowing parents to track everything from room temperature to sleeping patterns, he said none of the existing products on the market “solve all these problems together in a frictionless way”.

Baby gear companies are turning to innovation and trying to sell more expensive products to parents as they battle a falling birth rate in the US, the world’s second-biggest market for nappies behind China.

Millennials are putting off starting families, and the number of babies born in 2018 in the US was the lowest in more than three decades, falling 2 per cent from the previous year, according to the Centers for Disease Control and Prevention.

Pampers is P&G’s biggest brand, accounting for net sales of more than $8 billion (€7.13 billion) last year. P&G controls more than a quarter of the global market for baby care products. But, along with grooming, which has been hurt by rising competition from the likes of Dollar Shave Club, baby care has been one of the weakest-performing parts of the company.

Baby care sales in P&G’s third quarter, between January and March, fell in the “low single-digit” percentage range from a year ago. The Ohio-based company blamed “competitive activity and market contraction”, although rising prices and the disproportionate growth of premium products helped soften the blow.

Across the industry, US nappy sales ticked up only 4 per cent in the eight-year period to 2018 to $6.16 billion (€5.49 billion), according to Statista. Volumes slipped more than 9 per cent over the period, although revenues were supported by rising prices.

In contrast, the market for baby monitors is booming, with annual sales estimated to have risen almost 18 per cent to $1.1 billion (€980.5 million) over the past two years.

Privacy campaigners are concerned that internet-connected devices, from smart speakers to wearables, are enabling companies to suck up increasingly sensitive data that goes far beyond what was traditionally thought of as personal information.

Mr Chester said Lumi by Pampers “clearly is part of a well-thought out corporate strategy to effectively enmesh the company into our increasingly digital lives”.

He said its introduction “illustrates how the lack of a US federal consumer data law places everyone – even those just born – at ever increasing risk”.