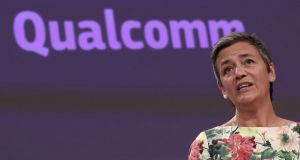 European Competition Commissioner Margrethe Vestager: “Dominant companies have a special responsibility not to impair competition in the market. They can sell at low prices but not below costs, with the intention of eliminating a competitor.”

The US chip giant Qualcomm was hit with a €242 million fine on Thursday by the European Commission for abusing its dominant market position by using predatory pricing, concluding a nine-year case just as Brussels’ antitrust chief prepares to leave office.

The commission’s investigation found that Qualcomm from 2009 to 2011 sold its own chipsets to two big customers without covering the cost of manufacturing them, with the explicit aim of pushing out smaller competitors such as the British start-up Icera.

The case is the second major penalty handed out by Margrethe Vestager, the EU’s competition commissioner, to the US group for using unlawful business practices to muscle out competing 3G and 4G chipsets.

Last year Qualcomm was fined €997 million by the EU for abusing its dominant market position by paying Apple billions of dollars to exclusively use its products in its iPhones and iPads, blocking alternative providers.

The commission’s decision on Thursday relates to how Qualcomm illegally offered Chinese companies Huawei and ZTE lower-priced products known as baseband chipsets, which allowed 3G mobile connectivity back in 2009.

“Dominant companies have a special responsibility not to impair competition in the market. They can sell at low prices but not below costs, with the intention of eliminating a competitor,” said Ms Vestager.

“To make sure Icera’s business could not reach a size that could endanger the market position of Qualcomm, Qualcomm took what it describes in internal documents as ‘preventive actions’. This means offering very targeted price concessions to two strategically important customers, namely Huawei and ZTE.”

Qualcomm has said it will appeal against the findings, which it said was “unsupported by the law, economic principles or market facts”.

Don Rosenberg, executive vice-president and general counsel of Qualcomm, said: “The commission spent years investigating sales to two customers, each of whom said that they favoured Qualcomm chips not because of price but because rival chipsets were technologically inferior.”

In 2010, Qualcomm sold 60 per cent of these chipsets worldwide, and Bristol-based Icera was one of just two other companies in the world that had a working 3G chip. At the time, the eight-year-old start-up was collaborating with Huawei, but Huawei said it could not sell Icera’s product because Qualcomm had threatened to increase its licence fee if it did, according to a source close to the complaint.

Qualcomm’s tactics led to Icera losing business, and was one of the contributing factors to the company’s eventual sale to Nvidia for $352m in 2011, the person said.

Defending the amount of the fine, which has been set at 1.27 per cent of Qualcomm’s turnover in 2018, Ms Vestager said the commission’s investigation did show predatory pricing, but “can’t show definitely that this is what pushed Icera to be bought by another company and eventually out of the baseband chipset market”.

The Qualcomm case is one of the last big decisions of Ms Vestager’s five-year term as competition commissioner, which has smashed competition enforcement records by hitting Google with more than €8bn in fines and forcing Apple to pay €14bn in back taxes. - Copyright The Financial Times Limited 2019