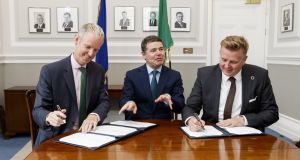 The loan, which brings Cubic’s total funding to €100 million to date, was formally agreed in Dublin by chief executive Barry Napier and Andrew McDowell, an EIB vice president.

The company has raised €75 million in funding from big-name backers such as Qualcomm and Audi. Other investors include Enterprise Ireland and the Ireland Strategic Investment Fund, the €8 billion fund which is managed and controlled by the National Treasury Management Agency.

“With this investment from the European Investment Bank, Cubic will deliver on its software roadmap to enable any cloud provider secure global connectivity directly on the chipset, hardware or device while having 5G ready to optimise future functions,” said Mr Napier.

Given the speed at which automotive and the internet of things markets are moving, the company will also accelerate its hiring to meet expansion needs, he added.

Cubic’s platform spans more than 180 countries and 75 mobile operator partnerships with about three million devices already powered by the company. Some of its clients include Audi, Panasonic, Volkswagen and Skoda.

According to Mr McDowell, the EIB’s investment will enable the company to “continue to invest in innovation and create highly specialist jobs in Ireland, strengthening European presence and competitiveness in this globally competitive sector”.

Established in 2005, Cubic is led by Mr Napier, a former EY Entrepreneur of the Year finalist. The company, which expanded into four new markets in Asia last year, also counts the likes of Microsoft, Vodafone and AT&T among its clients.