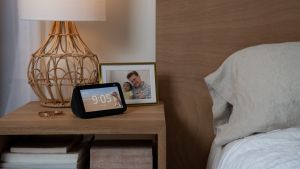 The Show 5 is perfect for checking up on the feed from your baby monitor, or checking out who is at the door if you have a Ring doorbell

I have a love-hate relationship with smart speakers. On the one hand, I like the idea of talking to something instead of tapping on a screen; once you get over feeling foolish talking to a machine, it’s a much more natural way to do things. On the other, as the Snowden revelations laid out in terrifying technicolour detail, our smartphones, laptops and other similar devices can be weaponised against us.

We have video doorbells and internet-connected baby monitors, thermostats that adjust themselves when we aren’t at home, wifi lightbulbs and smart appliances that will soon remind us when the milk is running low. Even if you don’t have a smart speaker you may still be being spied on – you just don’t know it. Excuse me while I ditch all my technology and seal myself in a Faraday cage.

The recent spate of news stories about how these speakers operate and the level of human involvement in the voice transcripts hasn’t helped soothe concerns about the devices. The latest is Google Assistant and the tech giant’s admission that human workers have listened to voice interactions.

So it was against this background that I got hands-on with the Echo Show 5. The miniature Echo device has a 5.5-inch screen and a speaker that is way better than its size would imply. It’s like a shrunken Echo Show. I have one of the 10-inch speakers in the kitchen, mainly so I can watch videos and get cooking instructions. The idea of having one in my bedroom fills me with a sort of revulsion, and that’s mainly down to the camera. My Alexa profile on Amazon is littered with accidental voice activations that give little snippets of my conversations to anyone with access to the account. The camera functions on the Echo are limited for now, but who is to say where it will go in the future? My worst nightmare, that’s where.

I’m not the only one. But Amazon hears you, tech users (and not just accidentally through your smart speaker). The Echo Show 5 comes with a camera shutter, so if you choose to put this on your bedside table and use it as a fancy alarm clock, you can stop it from getting a birds-eye view of whatever goes on there.

Because that is where you are most likely to put the Echo Show 5. Its small size means it is begging to be used as a smart alarm clock, one that you can use to keep an eye on your video cameras or control your smart home as well as play music and tell you when it’s time to get up. One thing I found it useful for was keeping an eye on the baby monitor, although it may be overkill for that alone. My couple of attempts at video calls failed, because it took too long to connect, so the one thing I can tell you is that the angle the camera was at was not a flattering one.

Someone could sneakily re-enable the camera; it is only a slider after all. But, in Amazon’s defence, it has made the camera shutter white rather than black, so you’ll see it is shut with a glance. The slider on top on the device is red, again to make it obvious when the camera is cut off. When you slide it back and forth, a notification on screen tells you if the camera is on or off.

Who needs to see me first thing in the morning, hair matted to one side, bleary and puffy-eyed?

It’s a concession, but removing it altogether would be preferable. If we are stuck with the smart speaker, and I suspect we are for the foreseeable future, I wish Amazon would stop trying to make the cameras happen. We’re not ready for it yet – although I’m not convinced that we ever will be. Time may well prove me wrong on that one; if someone had suggested a few years ago that people would willingly install devices in their homes whose sole function was to listen to their every word, I wouldn’t have bet on those being particularly popular. Our idea of what’s acceptable is shifting all the time.

I don’t mind the idea of a display that has a practical use outside of showing you the time. The Show 5 is perfect for checking up on the feed from your baby monitor for example, or checking out who is at the door if you have a Ring doorbell. All surveillance, yes, but none of it pointed at your bed.

You won’t be watching many films on a five-inch screen either, and the Show is limited mainly to Amazon’s video output right now. No Netflix access here.

If you’ve gone all in on smart speakers, the Echo Show 5 probably isn’t a huge leap. We are in an always-on, always-connected era. It’s just that sometimes it would be nice to close the door and switch off.

The good
The speaker is much better than I expected given its size, and the screen is decent if you want to watch a few short video clips.

The not so good
The privacy. What little vestige of it remains is being slowly eroded. The small size of the Echo Show 5 means it is in danger of being viewed as an expensive alarm clock, albeit one that will take instruction when it suits.

The rest
Where does this leave the Spot? For now, it’s hanging around. Its round display is only 2.5 inches, which means it is less useful for watching video than the Show 5.

The verdict
If the camera doesn’t bother you, then the Echo Show 5 works well as a smart speaker. But be prepared for “How much?! What exactly does it do?” style comments.