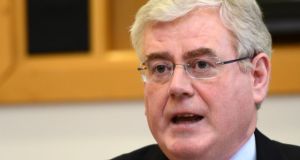 Eamon Gilmore, who was minister for foreign affairs from 2011 to 2014: “In something like this you have to be pretty well focused singularly on it.” Photograph: Alan Betson

A general election during Brexit talks about the future of the Border would deeply damage Ireland’s negotiating position, former ministers for foreign affairs and senior diplomats have said.

A key EU summit meeting is due to take place next month on the UK’s withdrawal from the union when the fate of the border post-Brexit could be effectively determined.

Eamon Gilmore, who was minister for foreign affairs from 2011 to 2014, said political divisions would weaken “the Dublin voice” at the most critical EU negotiations about Ireland and the Border.

“This couldn’t be happening at a worse time in terms of what is required for Brexit,” the former Labour leader told The Irish Times. “Okay, if there is an election called, the Taoiseach will still be there but everyone around the table will think that his mind is elsewhere.”

Such an election would fall at a critical time in preparations for the December 14-15th meeting of EU leaders and would lead to questions about where the Irish Government’s priorities lie, he said.

“In something like this you have to be pretty well focused singularly on it. This is not about turning up on the day and doing it,” said Mr Gilmore. “This is something that is being worked all of the time and requires a tension all of the time.”

The election would also be used against the Irish in the propaganda war over Brexit.

“What the British will be saying is that Ireland aren’t that worried about it; if they were, they wouldn’t be having an election over an email,” he said.

David Andrews, a former Fianna Fáil TD who served as foreign minister in the 1990s, said Brexit talks were at a stage where the Irish Government has to “play hardball” with the British.

“We should have no weakness. A general election, as is generally agreed, won’t help that,” he said.

Dick Spring, the former Labour leader who served as foreign minister from 1993 to 1997, said that Brexit was “probably the biggest challenge for Ireland and the future of Ireland this century”.

“It is absolutely vital that we have a government in position to deal with this, particularly given the timing of the next summit. It is extremely important that the two major parties find a workable solution at this critical juncture,” he said.

He questioned the merits of holding an election. “If there is an election, we weaken our position with Brexit and we are going to end up with much the same formation afterwards,” he said.

Dáithí O’Ceallaigh, a former ambassador to London, said Brexit was one of the biggest foreign policy issues facing Ireland for a very long time and required the total attention of politicians and civil servants as negotiations were “coming to the crunch” with the Irish Border at the centre of that.

“There is something very serious happening which is of crucial importance to this country and this island, and it needs political attention and if it is not there, it is dangerous for us,” he said.

Describing Brexit as “a disaster”, Colin Wrafter, a former senior Department of Foreign Affairs official, said the process was “a damage limitation exercise” for the Irish Government.

“The political class are shooting themselves in the foot by letting the possibility of a general election arise, he said.

“It creates the perception that our position has weakened and in a narrow sense, it weakened our position in the propaganda war.”