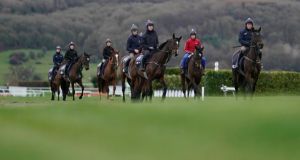 UK fund manager Artemis Investment Management has accumulated a stake of more than 3 per cent in C&C for the first time in more than a decade, as a wider shake-up in the drink-maker’s shareholder base continues apace.

The development last week came as C&C reported full-year figures and Tennessee-based Southeastern Asset Management cut its C&C holding to 5.7 per cent from 8.4 per cent.

Most of the firm’s interest is held by way of a joint venture with Egyptian billionaire Nassef Sawiris, and was as high as 18 per cent 16 months ago.

Elsewhere, Ferrari-loving US billionaire Charles Brandes’ Brandes Investment Partners has cut its C&C stake from 12 per cent to 7 per cent over the same period, while Fidelity Management & Research has emerged as the company’s main shareholder, with a 9.99 per cent holding.

Cheltenham named C&C’s Irish cider, known as Bulmers in the Republic and Magners in the UK, as the sponsor of the £625,000 (€720,000) steeplechase, the meeting’s showpiece, and as the festival’s overall presenting partner in what is a four-year deal.

According to Stephen Glancey, C&C chief executive, the festival’s heritage and its lure to Irish sports fans drew the Dublin-listed drinks company to the sponsorship.

Airline Ryanair and builder Ballymore are also lending their names to races during the four-day festival, which begins on Monday. Similarly, Guinness is continuing as a commercial partner.

However, this will be the first time that an Irish company has sponsored the Gold Cup itself. The race’s last Irish-based winner was the Jessica Harrington-trained Sizing John in 2017. “We were delighted with the chance to partner such a huge event,” Glancey says.

The company has been promoting it as the festival, “presented by Bulmers” here and “presented by Magners” internationally. Mr Glancey says a multi-channel marketing campaign, the Road to Gold, tying the Clonmel, Co Tipperary produced cider with the Cheltenham race, has been very successful. “It’s been really impactful in building footfall in the pubs,” he observes.

C&C says its backing of the race allows it to emphasise the cider’s Irish heritage but also to mark success in both its main markets. The company regards sponsoring an event “uniquely treasured” by Irish and British racing fans as a huge opportunity.

Neither C&C nor Jockey Club Racecourses, Cheltenham’s owner, has revealed the value of the deal. However, it appears to be benefitting both, as the Road to Gold has had 27 million mentions on social media.

Ryanair has a 13-year association with the festival. Its chief executive Michael O’Leary’s Gigginstown House was last year’s leading owner with seven winners. He will be hoping to repeat the feat in 2019.