Cider will be available in bottles, cans and on draught 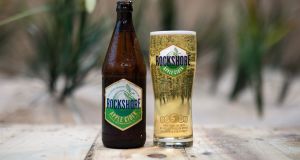 Drinks giant Diageo has formally launched its latest attempt to crack the cider market, which is dominated in Ireland by its rivals C&C and Heineken.

Diageo has confirmed recent market rumours by launching on Thursday Rockshore Apple Cider, the group’s third attempt to gain a foothold in the Irish cider market. Diageo previously tried to enter the segment in the late 1990s and early 2000s with Cashel’s and Hudson Blue, but neither brand gained any traction.

Rockshore Apple Cider follows on from Diageo’s successful launch last year of Rockshore Lager. The cider is being rolled out nationwide in coming weeks in the on-trade, supermarkets and in off-licences. It will be available in bottles, cans and on draught.

C&C’s Bulmers brand currently has about 63 per cent of the Irish cider market, while Heineken’s brand launched in 2015, Orchard Thieves, has about 15 per cent. Heineken also owns the brand Appleman’s, which has yet to match the success of its Orchard Thieves launch.

Diageo formally launched the brand on Thursday evening in the RDS arena in Dublin 4. About 1,000 publicans from around the country were invited to the arena for the launch event, which started at 5.30pm.

The new brand will be backed up with heavy advertising next month on television and billboards. Diageo is pitching the new cider as being less sweet than others on the market, seen as a reference to Bulmers.

“We have been experimenting and trialling cider recipes for several years and we believe that we have landed on something refreshingly different,” said Stuart Kinch, Diageo’s head of marketing for beer and cider.