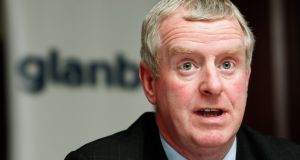 They say there’s not much that gets to former Glanbia boss John Moloney. The term “unflappable” is used by colleagues. So I start my interview with him on the thorny issue of agriculture and climate change, and whether he thinks the sector’s post-quota ambitions can be reconciled with the State’s climate commitments.

The question is more pertinent than you might think as he’s the guy who chaired the panel of experts that drew up the previous government’s Food Wise 2025 strategy, effectively the blueprint for expansion.

“Ultimately it comes down to producing more with the same or less inputs,” he says. By which he means a paradigm shift in productivity and the mass adoption of new technologies. “The real political question for those who are not prepared to adapt is what the Government’s carrot-and-stick mix is going to be.”

While emissions per kilo of milk solids produced here is relatively low by European standards, emissions per head of population are relatively high because of the large cattle herd, which has swelled to seven million since the lifting of milk quotas in 2015.

I put it to Moloney that a similar dairy-fuelled expansion in New Zealand, Ireland’s equivalent in the southern hemisphere, has taken its toll on the environment there, with water pollution from cattle waste threatening many of the country’s waterways.

Moloney, presented on Friday with the 2016 RDS Gold Medal for Enterprise, concedes that the Food Wise 2025 strategy may need to “be scaled back” to fit the Government’s climate mitigation plan, which is currently being devised, and that there were always likely to be trade-offs against the value of future output.

That’s a controversial admission, but he insists the strategy was drawn up as a measure of “what’s possible”.

“Irish agriculture is an accident of history because we didn’t have any smokestack industries. We missed the industrial revolution,” Moloney says.

He also highlights the fact that the industry supports 270,000 jobs, dwarfing the employment footprint of big pharma and IT combined, and must be supported in its response to climate change.

Moloney is no stranger to transformation; in fact, he sees it as a signature theme in his career.

When he took over at the helm of Glanbia in 2001, the company was one of the worst-performing companies on the Iseq index. Moloney set about rationalising the business, reversing out of the UK liquid milk market and selling off its UK cooked meats and cheese operations, while simultaneously upscaling its cheese operation in the US, where it is now the largest producer of cheddar cheese.

However, it is as the mastermind of Glanbia’s migration into sports nutrition that his tenure in charge will be most remembered.

“We were producing over 400,000 tonnes of cheese a year with a very large whey pool, and therefore we put investment and technical resources into breaking out the valuable fractions of the whey using the emerging filtration technologies,” he says.

The company began selling protein ingredients for the fortification of foods, sports bars and powders.

However, not content to take a back-seat role in one of the biggest consumer trends on the planet, Moloney shifted gear and moved into the retail end of the market. The breakout acquisition of Optimum Nutrition for €300 million in 2008 led to the company becoming the world’s leading supplier of performance nutrition foods and supplements, now a €10.6 billion market.

The final period of Moloney’s stewardship at Glanbia was taken up with a major restructuring of the group, involving the co-op taking a reduced shareholding in Glanbia and the establishment of a new joint venture, Glanbia Ingredients Ireland.

This has facilitated the construction of Glanbia’s giant Belview plant in Kilkenny, which processes 700 million litres of milk annually, the biggest single footprint of any dairy company, tailored specifically to meet the sector’s post-quota ambitions.

During his 12-tenure in charge of the Kilkenny-based food business, the shareholders enjoyed a 25-fold return on their investment, meaning there has been no end of job offers since.

He currently holds directorship roles in Greencore, Smurfit Kappa and DCC, where he is chairman. He is also the chairman of the forestry agency Coillte and works with the homeless charity Focus Ireland.

He lives with his family in Dungarvan, Co Waterford.

In recognition of this success in business, the RDS this week awarded the 61-year-old Wexford native its gold medal for enterprise, one of the State’s top business accolades.

“I opted not to give a speech, I think the worst thing you could inflict on people is me giving a rant after lunch,” says Moloney. He preferred instead to take part in a question and answer session.

He believes the two things that have defined him in business have been the ability to embrace change and to select the right team around him.

A University College Dublin graduate, Moloney also holds an MBA. He initially joined the Department of Agriculture after college and entered the industry directly when he took up the post of divisional manager of the agricultural trading division of Waterford Co-op, which was later merged with Avonmore to form Glanbia.

He describes Brexit as the biggest risk to the food industry here since the foundation of the State. The doomsday scenario, as he sees it, is a hard Brexit whereby Britain exits the single market and reverts to World Trade Organisation (WTO) rules, which would put tariffs and logistical barriers between exporters here and the UK market.

“Traditionally, the UK has been our biggest market, taking 40 per cent of our exports,” he says. “It’s the natural place for smaller companies looking to scale up.”

The immediate impact for exporters is, of course, the currency shift. For most of 2015, sterling was trading at 72p per euro, now it has settled at around 85p.

He points to a Food and Drink Industry Ireland metric, which suggests that €1 million of exports sustains about 10 full-time jobs here.

A structural shift to a 90p rate would reduce employment in the sector by about 16 per cent, which equates to 7,500 jobs, Moloney says.

He believes the Government and industry have an interest in getting the best people involved in scenario planning.

Moloney believes Brexit and the rise of Donald Trump in the US reveal how fragmented societies have become.

“There are countries within countries, with many people feeling left behind, and when you overlay that with the migration issue it makes for a combustible mix,” he says.