Management of farmers’ organisation have ‘made decisions’ about treasurer’s future 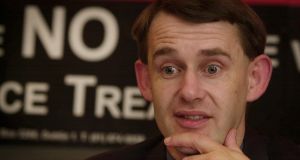 The National Party is headed up by Justin Barrett, a critic of the European Union. Photograph: Dara Mac Dónaill.

The management of the Irish Cattle and Sheep Farmers’ Association (ICSA) convened a special meeting on Friday afternoon to discuss the involvement of its treasurer James Reynolds in a new anti-immigration and anti-abortion political party.

On Tuesday it was revealed that Mr Reynolds, a former Longford county chairman with the Irish Farmers’ Association who later moved to a senior position in the ICSA, is the deputy president of the National Party. The new political entity intends to run on a platform that opposes abortion, immigration and multiculturalism.

The National Party was due to hold a high-profile “information meeting” at the Merrion Hotel in Dublin on Thursday but the event was cancelled by hotel management following a number of complaints.

The Irish Times asked the ICSA about its position regarding its treasurer’s involvement in the new party. A spokeswoman confirmed that a management meeting was convened and “decisions have been made” about the situation.

She refused to divulge what decisions have been taken, and said such information would not be made public until the organisation’s national executive had been informed of the outcome. It is thought that this will happen on Monday.

The position of treasurer is an elected office within the ICSA, which has a membership of about 10,000 farmers nationwide.

Speaking to the media on Wednesday, Mr Reynolds said the National Party was formed some months ago and has been holding “well-attended” meetings up and down the country since then.

The group is headed by Justin Barrett, a prominent anti-abortion campaigner and critic of the European Union.

1 Who are Ireland’s 17 billionaires?
2 The entrepreneur who went from ‘total poverty’ to a Lamborghini
3 My father in a nursing home wants to gift me his house
4 Are there annual limits on inheritances or gifts to a child?
5 State subsidises public sector retirees to cover gap until State pension
6 Avolon executives share €27m in pay as revenues soar
7 O’Flynn company ‘mistakenly’ got go-ahead for Birmingham project
8 Swiss police suspect Davos plumbers of being Russian spies
9 Proinsias O’Mahony: Should investors ‘drop their shorts’?
10 Help, I’ve no PRSI stamps – can I still get a pension?
Real news has value SUBSCRIBE