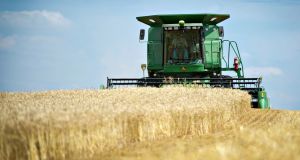 Agri-services group Origin Enterprises has reported an 11 per cent increase in revenue to €333.6 million for the three months to October 31st, up from €300.4 million in the corresponding period last year.

In a trading statement published on Friday, the company said underlying revenue increased by 1.3 per cent reflecting higher seed, crop-protection and fertiliser volumes, largely offset by lower fertiliser and feed prices and lower crop-marketing volumes. The weaker value of sterling versus the euro was also a negative.

It said a combination of generally favourable weather conditions and an improved planning environment for primary producers in the period in key markets led to good early-season activity levels on-farm, resulting in higher demand for the Origin’s services and inputs.

Origin said business-to-business agri-inputs achieved a good result in Ireland and the UK during the three-month period, with performance benefiting from a combination of higher volumes and improved margins.

The group’s Polish farm services business now operates under the Agrii brand following the merger of Dalgety and the Kazgod Group, which was acquired in the 2016 financial year. Origin said performance there was satisfactory in the seasonally quiet first quarter.

Origin acquired Poland-based Kazgod Group for €22.4 million. Kazgod is a manufacturer of micro-nutrition applications, which track users’ intake of basic vitamin and minerals, and a provider of agronomy services and crop marketing solutions.

In the Ukraine, where Origin trades under the name Agroscope, winter plantings were significantly ahead year-on-year.

Davy Stockbrokers in a note to clients said that in what is a seasonally quiet period for the group “the outturn provides a good foundation for the year ahead.” It added that “ Origin saw higher demand for service and inputs in the period with favourable weather conditions aiding a good planting campaign in key markets”.

Goodbody Stockbrokers said that it was “ encouraged by Origin’s start to the year and we retain our positive stance on the stock. Given over 90 per cent of profit is typically generated in the second half of the year, we are unlikely to make material changes to our forecasts at this early stage of the year.”