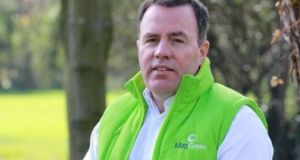 Irish agritech company MagGrow has raised €6 million in a funding round led by a venture capital firm whose co-founder previously led investments in a number of well-known companies.

MagGrow has developed a magnetic spraying technology that reduces spray drift by 70 per cent and increases coverage by between 20 per cent to 40 per cent versus conventional methods.

Brussels-based Astanor Ventures, which was co-founded by Eric Arcambeau, led the investment in MagGrow with WakeUp Capital among the other participants.

MagGrow has raised in excess of €10 million to date, including €3 million in a funding round in 2018.

Mr Arcambeau built and sold two tech companies in Palo Alto before becoming an investor. As a partner at Balderton he led investments in companies that include betting company Betfair, which later merged with Paddy Power. He also played a key role in leading German VC firm Wellington Partners to become one of the leading European investors on the back of early bets on companies that include Xing, Spotify, Onfido and MyTaxi (now FreeNow).

As part of the new investment, Hendrik Van Asbroeck of Astanor and Faye Walsh Drouillard of WakeUp Capital are to join MagGrow’s board. In addition, Arthur Pierce, a principal at Astanor, will attend future board meetings in an observer capacity.

MagGrow said it intends to use the new investment to continue the roll-out of its Tractor Boom product and to accelerate R&D of new products, intellectual property and application. It also intends to ramp up its manufacturing capacity.

The company has partnered with a number of academic institutions in recent years, including Wageningen University in the Netherlands, Harper Adams in Newport, England, and Amber, the SFI research centre for advanced materials and bioengineering research, which is based at Trinity College Dublin.

“These impact investors align with MagGrow’s core values and our collective desire to do our part in feeding this planet sustainably,” said Gary Wickham, the company’s chief executive and a finalist in this year’s EY Entrepreneur of the Year awards.

“The way to do this is to ensure farmers are profitable in the first instance and sustainable. This is where MagGrow’s technology steps in as it allows farmers to achieve both simultaneously and, in doing so, supports the sustainable intensification of global food production,” he added.