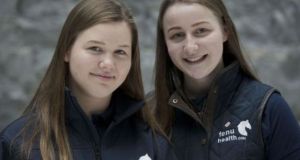 FenuHealth co-founder Kate Madden has taken second place in a competition to find the best student entrepreneurs in the world.

Ms Madden (20), who founded FenuHealth with her sister Annie (18) in 2015 while both were still at school, was last week named the only woman to make the final, for which more than 1,500 applicants from over 50 countries applied.

The prestigious awards, which began in 1998, are open to students who own and operate a business while still attending college or university. The competition aims to support student entrepreneurs to scale their business.

As runner-up, Ms Madden, who is studying for a BSc in food marketing and entrepreneurship at University College Cork (UCC), receives a $10,000 prize and a scholarship to take part in the EO Accelerator Programme. The outright winner was Harvinder Power from the UK, who leads a company called Motics, which gamifies physiotherapy and provides recovery data to clinicians to speed up recovery and motivates patients to recover. He was awarded a $25,000 prize.

“The opportunities and the connections which being runner-up has given me are amazing,” said Ms Madden.

FenuHealth, which is based in Co Meath, produces powdered supplements that are added to feed to help prevent and resolve stomach problems in horses and ponies.

The business was built on work done by the Madden sisters as transition year students taking part in the BT Young Scientist and Technology Exhibition. It now trades internationally and counts five royal families among its customers.