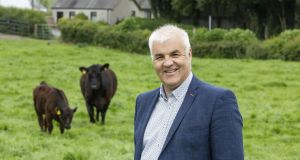 Devenish chief executive Richard Kennedy predicted that, as a result of the coronavirus pandemic, there will be fewer restaurants with more expensive and more sustainable food.

Irish agri-tech business Devenish expects to grow revenue to £240 million (€269.3 million) this year, although its aim “was to grow quicker” and its ambitions have been stymied by the Covid-19 pandemic, the company’s boss said.

“We’re looking to grow exponentially all the time and for us the pandemic has slowed us,” Richard Kennedy, the company’s chief executive, told The Irish Times, noting that revenue of £233 million was achieved last year.

“We have a road-to-zero programme, we’re going to deliver carbon-neutral beef and dairy, and we’ve invested in our soil and carbon sequestration work and we’re implementing that,” Mr Kennedy said.

He also noted the company’s feed product to provide omega 3 to chickens and pigs. “Those chickens are healthier but we’ve also proved that when people consume those three times a week they’ll halve the level of strokes and heart attacks they’ll have,” he said.

On the outlook for much of the food-service industry as a result of the pandemic, Mr Kennedy predicted there will be fewer restaurants with more expensive and more sustainable food.

Devenish has set itself a challenge of delivering carbon-neutral beef by 2025. The company has had interaction with Government. “We must have a long-term Government because we need a long-term plan,” Mr Kennedy said.

“One of the interesting figures is that in the next 30 years we’re going to have to produce more food than we have in the last 10,000. The demand is to do that sustainably,” he said.

Among other projects the company is working on is developing new feed for fish with new protein sources given that global demand for fish is growing at a faster rate than fish production. In the pig and poultry sector, the company has developed a product to reduce the carbon impact of those meats by 17 per cent.

“Most innovation in the food industry is during the processing period. Our innovation is applied at farm level,” Mr Kennedy said.

“I think we’re going to have a new normal, I’m quite excited by it and when there’s something new or different it’s my role to be enthusiastic about that.”