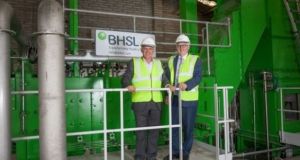 Jack and Declan O’Connor of BHSL

The company, founded by brothers Jack and Declan O’Connor in Co Limerick in 2009, originally developed technology to convert poultry manure into energy. But it has since expanded into related sectors on the back of buying waste-water and effluent treatment company Hydro International in 2017, and waste processor Glanway a year later.

The new financing consists of €6.7 million in equity and €1.8 million in loan notes. Some €4 million of it is to be used to fund the expansion of the Glanway processing facility at Bellview Port in south Kilkenny, with the balance to be used for working capital.

Recently filed documents show that Moffett Investment Holdings, a vehicle controlled by Combilift co-founder Robert Moffett, is among the backers in the latest round, as is Grant Engineering founder Stephen Grant.