Company suspends dividend for this year in light of uncertain conditions 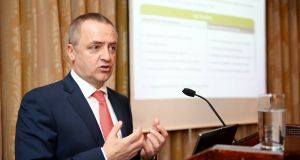 Unusual weather conditions was among the factors that pushed revenue at agriservices group Origin Enterprises lower by 6.7 per cent to €1.2 billion in the nine months to the end of April, the company said as it suspended its dividend for this year.

The wettest autumn/winter planting season in 30 years was cited as the main reason for reduced demand from farmers in Ireland and Britain.

This has been compounded, the company said, by “extremely dry conditions in the third quarter which persisted into June” which have had a negative impact on the potential to grow crops.

Nevertheless, revenue in the third quarter rose by 1.6 per cent to almost €605 million despite operating restrictions as a result of the Covid-19 pandemic.

Underlying group revenue fell 8.3 per cent in Ireland and Britain to €372 million in the third quarter while it dropped more than 17 per cent in the company’s Latin America arm to €1.6 million. Continental European revenue grew by 22.8 per cent to €196.9 million.

In the nine months to the end of April, the picture was worse in Ireland and Britain, with revenue down 16.4 per cent to €709.5 million.

Crop planting for autumn, winter and spring is expected to be 10.7 per cent lower than last year. Prolonged unseasonable weather conditions resulted in “lower volumes and margins for fertilised and animal feed ingredients”, the company said.

In continental Europe, persistent dry conditions for much of April and May “reduced yield potential and resulting farm spend”, Origin said.

As a result of the uncertain market conditions, the board found it to be prudent to suspend the final dividend for this year.

The Covid-19 crisis has also disrupted the company’s activities and although its agricultural supply chain businesses were viewed as essential, its amenity businesses furloughed staff on a rotating basis from late March onwards. The company’s board and directors also took a voluntary 20 per cent reduction in fees and base salaries.

But the group flagged that it “continues to be in a solid financial position, with net debt broadly in line with last year’s levels. “We continue to operate within our banking covenants, with in excess of €125 million in undrawn lines of credit available.”

It added: “In what has been a challenging year due to extreme weather conditions and the operational challenges presented by Covid-19, the group expects to deliver a resilient financial performance.”

Earlier this month Origin announced the retirement of Tom O’Mahony after 13 years as chief executive. He will be replaced by chief financial officer Sean Coyle.