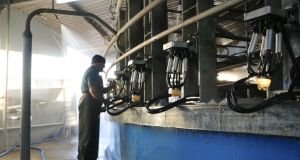 The Teagasc national farm survey for 2019 shows dairying yields by far the largest income for Irish farmers, while beef farmers continues to struggle.

Irish Farmers’ Association president Tim Cullinan said the results show the scale of the task facing the new Government. “The modest increase of 2 per cent was entirely down to lower costs, not to price improvements, and was on the back of a very difficult year in 2018 for farming. In reality, the 2019 average family farm income is down 24 per cent on the 2017 average of €31,374,” he said.

The average family farm income rose to €23,933. Better weather made for good production conditions in 2019, while lower output prices were experienced in some sectors, the survey concludes.

The dairy sector experienced the largest cost reduction in 2019, and coupled with a further increase in milk output volume, produced an average income of €66,570, an increase of 9 per cent on the 2018 level. This occurred in spite of a fall in milk prices of 3 per cent last year.

The results are representative of more than 90,000 farms in Ireland but do not include large pig farms which saw significant increases during 2019.

Due to the extreme weather experienced in 2018, farmers incurred a large increase in production costs. “However, weather conditions were more favourable for agricultural production in 2019, and this reversed much of the increase in spending on feed, fertiliser and silage making that had occurred in 2018,” according to Teagasc.

These cost reductions should have been enough to boost incomes significantly but market conditions led to a reduction in output prices for cattle and cereal crops in particular, with the price of milk also falling.

The average farm income of €23,467 is well below the average industrial wage, the IFA president pointed out, while direct payments made up 77 per cent of farm income. “Tackling the income disparity at farm level must be an absolute priority. The recent agri-food 2030 strategy consultation survey showed that lack of profitability/income was the main deterrent to young people getting involved in the sector.”

“These figures are unsustainable and serious action is needed. Farmers are not getting a fair price for their produce while their payments are reducing and they are facing increased costs, some of which are due to further requirements being enforced on farmers,” he said.

The Government had to insist on a CAP budget at EU level to cover inflation and any extra requirements being asked of farmers, while the proposed new food ombudsman “has to bring full transparency to the entire chain”, the IFA leader insisted.

In an online briefing Trevor Donnellan of Teagasc’s Rural Economy and Development Programme said they were satisfied that with imminent EU CAP reforms and a new “farm to fork” strategy Irish dairy farmers had the capacity to ensure compliance on sustainability including emissions, “and achieve decent levels of income”.

“The fall in Irish cattle prices in 2019, reflected a number of issues, including an increase in Irish cattle supplies, and weaker demand for beef in both EU and UK export markets,” the reports adds. Decline in the value of sterling versus the euro, driven by concerns over the economic impact of Brexit, also weakened cattle prices.

Difficulties in beef during 2019 were offset additional support payments in the form of the Beef Exceptional Aid Measure and the Beef Environmental Efficiency Programme.

The survey is available at https://www.teagasc.ie/publications/