Government pushes back on complaints of cuts by farming groups 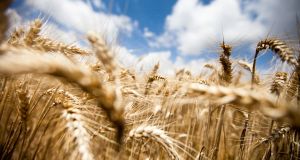 Irish farming organisations had been concerned that the deal would entail a reduction in subsidies. Photograph: Trevor Snapp/Bloomberg

Irish farmers will receive an estimated €10.73 in European Union funding under the Common Agriculture Policy (Cap) over the next seven years, according to Government figures.

The Department of Agriculture pushed back at concerns from Irish farming organisations that the deal secured in Brussels in marathon negotiations over the weekend would entail a reduction in subsidies.

This includes a top-up of €337 million in rural development funds and €194 million from a new recovery fund agreed by EU states to pay for additional spending to counteract the effects of the Covid-19 pandemic, aside from the standard seven-year budget, the Multiannual Financial Framework (MFF).

“The original Commission proposals involved a 5 per cent cut in the CAP element of the MFF. That would have cost Ireland over €90 million per annum,” Minister for Agriculture Dara Calleary said. “Despite differing views among member states on a range of budgetary issues, including those related to funding the CAP, we have managed to reverse those cuts.

“The Government’s position has been that a strong and properly funded Cap is needed to support the sector. The agreement reached in the early hours of Tuesday morning represents a positive outcome in that regard.”

In any case, the economic advantages of being in the single market far outweigh the simple accounting of national contributions and subsidies, the Minister said.

“The value of the European Union and the single market to Irish agriculture, significantly outweighs any variability in the multiannual budget for the Cap,” Mr Calleary said.

The deal struck after marathon talks between EU leaders that stretched over 90 hours delivers a once-off €750 billion stimulus fund to counter the economic impact of the pandemic, funded by borrowing by the European Commission for the first time.

Ireland is in line for €1.3 billion in grants from the recovery fund in 2021 and 2022, with a further amount to be calculated depending on the depth of the recession. In addition, €360 billion in loans are available for states to draw down on if needed.

In addition, the leaders agreed a €1.074 trillion budget for the next seven years, to which Ireland expects to be a net payer.

The deal must now be ratified by the European Parliament and an aspect of it must be signed off by national parliaments before formal adoption.