Yogurt maker is stocked by a number of UK retailers 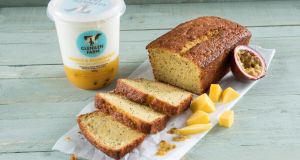 Glenilen Farm: Yogurt accounts for about 60 per cent of sales while the dessert category has grown to about 25 per cent.

Yogurt maker Glenilen Farm is targeting up to 10 per cent growth next year, bringing sales towards the €5.5 million mark as it expands its range.

The Co Cork based food company plans to launch a low-fat product range next month to add to its portfolio, which includes yogurts, cheesecake desserts, butter, cream cheese and crème fraîche.

Founded by Alan and Valerie Kingston, Glenilen sells across Ireland and the UK. It ships about 20,000 jars of yogurt a week to the UK and between 5,000 and 6,000 cheesecakes. It it stocked by a number of UK retailers, including Waitrose and Sainsbury’s.

Mr Kingston said the company is “very positive about growth in the next year” when it’s targeting an increase in sales of 8-10 per cent.

The Kingstons built their first dairy in 2002 when sales were concentrated among independent stores. In 2006, it achieved national listings with Musgraves and Tesco, while Dunnes Stores followed in 2008. In the same year it invested €2 million to increase capacity, and by 2010 the company started exporting to the UK.

Initially supplying Harrods and Selfridges, it struggled to make its UK business viable because of the small volumes involved. A listing with Waitrose followed in 2012 and Sainsbury’s in 2017.

“The UK is naturally on our patch and in terms of taste and flavour profile it’s very similar,” Mr Kingston said, adding that it is not looking at expanding to other European markets. In January, the company will be listed in an additional 200 Sainsbury’s outlets.

Yogurt accounts for about 60 per cent of sales while the dessert category has grown to about 25 per cent. Glenilen, which employs 38 staff, will look to grow the dessert figure given that it is higher margin, although Mr Kingston noted that those products are more focused on the UK market at present.

Asked whether private label may provide an opportunity for expansion, Mr Kingston said: “A lot of companies seek to grow and grow substantially and quickly but we’re much more focused on provenance... there’s loads of volume available in private label markets but for us right now we’re our own brand.”