Belfast printer thrives on move from repro to digital 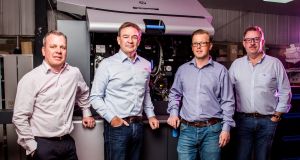 Northern Ireland’s foremost digital printing company, Northside Graphics, began life as a repro house in 1988. In those years, Northside ran film to enable printers to make plates to go on the printing press. At least, that’s how company director Gary White explains it.

The company was started by Robert Pierce, who was in charge up until 2010. That was when Gary and brother Neil, also a company director, took over the business.

“It wasn’t going out of business, but it wasn’t doing as well as it should have been. Neil and I had our own company, Pod Print. We decided to join the two together and that’s when things started improving.”

Pod Print had been profitable throughout the recession because of a lean cost structure, while Northside was a bigger company and had to implement redundancies, according to Gary.

The company consists of three components. There’s Northside Graphics, which is a traditional offline structure. When Gary and Neil took over, they added digitalprintingco.uk, which is business to business. Eventually, tradedigitalprint.co.uk was also created.

Gary says that adding an online component was the only way he could see of growing the business. “That’s essentially when we turned from a traditional bricks and mortar printer to an online printer.The trade side of our business was shrinking and the market was over capacity throughout the British Isles. Moving online was the only way I could see to make the business grow,” he says.

“The age of the people we deal with at Northside is older, while we deal with millennials online. We’d see this as a huge way we can grow because as more and more millennials get into a professional position where this is part of their remit, the first thing they do is go online.”

Northside’s produces everything from leaflets to roller banners. It prefers to take a green approach in encouraging customers to order small batches, says Gary.

“Most people have a load of brochures in a back room that need to be updated. We focus on smaller amounts to encourage people to buy only what they need.”

HP Indigo is recognised as the best in the industry but Gary says they’re expensive to run. How does this match up with the low costs of the business?

“We try to automate wherever possible. If the customer gives us a PDF, we run that through an automated checking system. If it’s right, it ends up on the printing press without anyone touching it,” he says.

The company now has 45 staff, comprising people in sales, accounts, pre-press, printing, finishing and dispatch. This year, they recorded an annual turnover of £2 million online – accounting for 40 per cent of their total £4.5 million revenue.

One of their problems has been finding staff. The company is in the market for 10 more to operate the printing presses this year.

Northside Graphics is the only digital printing company in Ireland to have four HP Indigo digital presses. New staff have to be trained to use the equipment and many of their new hires have never worked in the industry before, or have been made redundant from traditional printers.

“In September this year we could finally say we had enough staff but October was busier than usual, so we’re behind again,” says Gary.

A good time, then, to expand into the European marketplace? Northside Graphics is moving into 21 European countries, including France, the Netherlands and Norway.

“We’re geared up to turn everything around in 24 hours in Belfast so we think we’ll be able to send it any of those 21 countries in Europe for a lower price than what people in Europe are charging.

“With Brexit, we have no idea what’s going to happen, so this is an easy way to dip our toe in the water.

“The new bit is the timescale in which the parcels should arrive and ensuring that the customer gets the service we say we’re going to give them. We’ve gone with DPD as a logistics suppplier. They are very experienced so hopefully they’ll come up with the goods,” says Gary.

Northside Graphics was recently named SME of the Year at the UK-wide Print Week Awards at a ceremony at the Grove House Hotel in London.

“This was the first year we entered. They judge based on your growth, whether you’re profitable and whether you’re innovative and pushing boundaries,” says Gary. “Now, companies are looking at us to see what we’re doing.”