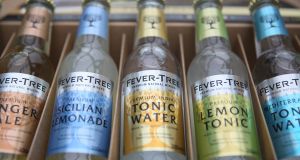 Shares in London-based Fevertree Drinks dropped as much as 6.8 per cent on Tuesday even after the company reported full-year earnings and sales that beat analyst estimates. Photograph: Neil Hall/Reuters

Fevertree Drinks, which has seen a meteoric rise in its share price since going public in 2014, lost a bit of fizz on Tuesday.

Shares of the London-based maker of premium drink mixers dropped as much as 6.8 per cent even after the company reported full-year earnings and sales that beat analyst estimates.

Fevertree reported a 64 per cent jump in full-year core earnings as the tonic water maker benefited from Britain’s thirst for gin.

“The market has become rather accustomed to Fevertree beating expectations and upgrading guidance,” Neil Wilson, an analyst at ETX Capital, said in an email. “When results are just moderately ahead, things look a little flat.” While today’s numbers were very strong, the outlook for 2018 appears to be “relatively cautious”, spurring profit-taking, he said.

Before Tuesday, the shares had risen about 1,900 per cent since listing in London in November 2014, and analysts are mostly positive on the stock. – Bloomberg