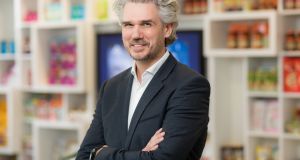 Bill Heague joins the Irish team directly from a market director position in the Czech Republic where he led the integration of the Mars and Wrigley businesses.

Mr Heague assumes the position from John Pickering, and comes to Ireland having spent 10 years with Mars in Australia, the Czech Republic and Slovakia. He joins the Irish team directly from a market director position in the Czech Republic where he led the integration of the Mars and Wrigley businesses.

As head of the Irish business, which employs 90 people and reported turnover of some €137 million in 2016, Mr Heague will focus on continuing to drive value for stakeholders in Ireland, while also playing a role in public policy initiatives for the industry.

“Having worked in diverse markets, I know I can bring a lot of value to our customers as well as a fresh approach to my colleagues. Initially, I want to focus on listening to the team, gaining from their insights and exploring the challenges and opportunities facing our industry at the moment. I’m particularly interested in ensuring the Mars Ireland business is taking its place on the international stage to ensure sustainability and healthy eating targets are met. I am confident that the future is bright for Mars in Ireland,” Mr Heague said.

2 Ireland has greater access to vaccines through EU, Donohoe says