Zambrero to serve up 100 jobs in Irish expansion 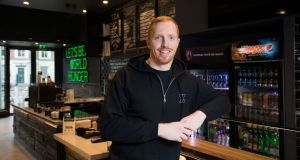 Darragh Fanning, general manger of Zambrero Ireland. He says the plan is to open 45 outlets across Ireland over 15 years. Photograph: Tom Honan.

Mexican restaurant chain Zambrero is set to create 100 jobs across Ireland as it targets up to six new restaurant launches this year, with a target of 45 outlets over the next 15 years across the island of Ireland.

The Australian-founded quick service restaurant franchise, which has a focus on healthy Mexican food, first opened on Dublin’s Hatch Street in 2016. It is now looking for franchise partners to build its presence in Ireland as it readies a launch across the Irish Sea into the UK.

It currently has four outlets in Dublin, including Hatch Street and Parnell Street, and one in Cork.

Like many franchise ideas, Darragh Fanning, general manager of Zambrero Ireland, came across the chain when he was abroad, playing rugby with the Tuggeranong Vikings in Canberra.

Upon his return, a two-year period playing for Leinster followed, having gotten the call at the age of 27. “It was all I wanted to do, it was dream come true stuff,” he said.

But with his Leinster contract coming to an end in 2016, Mr Fanning, then aged 29, had the option of moving to play in the premiership in the UK or focus on life after rugby. Fearful of playing rugby for another two or three years and then being left in need of a career, he opted to throw himself into Zambrero.

Having struck up a friendship with Sean McCarthy, a former coach at St Mary’s and in Canberra, the opportunity presented itself to turn this into a business partnership when Mr McCarthy, who had the franchise for Zambrero in Queensland, Australia, was looking to bring the brand to Europe.

The original team, which includes Mr Fanning, Mr McCarthy and two others, now control four Zambrero restaurants, having put €3 million into launching the Irish operation. They recently opened a franchise at Beacon South Quarter in Sandyford.

Zambrero is targeting another five or six restaurant launches this year – all franchises – with one set to open outside Dublin in April, and a further two imminent. The chain already employs about 100 people in Ireland, and the next stage of expansion should see another 100 added by the end of the year.

Mr Fanning says the plan is to open 45 across Ireland over 15 years. “And we’re on target for that.”

Growing the chain has not been without challenges. Mr Fanning concedes that his first year was “hugely challenging”, while navigating the commercial property market has also proved difficult.

“It’s the biggest barrier; we lost two franchise partners as they couldn’t find a site that suited,” he says, noting that while rents are steep, finding a place can be even more difficult, with restrictions on food-use in certain buildings or areas – something that surprised his Australian partners.

An expansion into the UK is also part of the plan, with the team hoping to partner with a local operator to open the first Zambrero there by the end of this year or early in 2019.

Our location disadvantages mean our vaccination rate must be among the quickest 05:40
Right to disconnect crucial to Government’s remote working aspirations 05:39
Eastdil to advise Johnny Ronan and Oaktree on glass bottle site 05:26
Crisis news ratings, robots that care and ‘Donald who?’ 05:10
Iconic Labs served with high court claim in London 19:43

6 Should I buy an investment property or save for my dream home?

9 Crisis news ratings, robots that care and ‘Donald who?’