As sugar tax nears, Coke’s ‘innovation pipeline’ is stocked with tea and other surprises 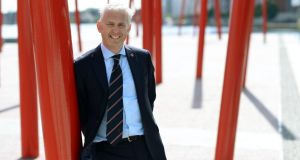 Jon Woods, general manager of Coca-Cola for Britain and Ireland: “I’ve spent my whole career selling products that I like to consume.” Photograph: Dara Mac Dónaill 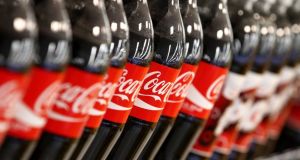 From April 6th, “take-home” Classic Coke bottles are shrinking to 1.5l to take the edge off the effects of the sugar tax. Photograph: SeongJoon Cho/Bloomberg

At the Coca-Cola Company, the more things change, the more Coke itself stays the same. While other soft drinks in its portfolio such as Fanta and Sprite have seen their sugar content gradually fall to avoid being captured by the imminent sugar tax, Coke is Coke.

“When we talk to consumers, they react very negatively to the idea that we might change the recipe for Classic Coke,” says Jon Woods, general manager of Coca-Cola for Britain and Ireland. “We tried it once before, and it’s become one of the great marketing textbook stories of what not to do.”

Coke’s own website describes the 1985 launch of New Coke as having spawned “consumer angst the likes of which no business had ever seen”.

But Coca-Cola, headquartered in Atlanta, Georgia, is a 132-year-old drinks behemoth: it survived its self-inflicted blip, and it will survive the sugar tax even as the price-per-litre of its mainstay product rises by what might be an off-putting amount for some.

Higher prices may well tip Coke loyalists in the direction of the company’s widening and heavily marketed array of sugar-free drinks, but this was a process that was happening anyway, according to Woods.

Coke is still the portfolio leader, but if its light variants Diet Coke (born in 1982) and Coca-Cola Zero Sugar (originally Coke Zero, and much closer in taste to the classic drink than Diet Coke) are combined, they outsell Coke 60:40.

“The lights are getting bigger, and the Classic is getting relatively smaller in the mix, and that’s been the trend, frankly, since we launched Diet Coke in 1982,” says Woods. In the 1980s, sugar wasn’t targeted in public health conversations as a great evil as it is today, but it was the decade of Jane Fonda workouts and “people starting to think about calories”, he notes.

From Belfast, Woods has been at Coca-Cola for 13 years, and previously worked for drinks group InBev and for Cadbury, “so I’ve spent my whole career selling products that I like to consume”, which he describes as fortunate.

The company employs about 1,600 people in Ireland, with manufacturing sites in Ballina and just outside Lisburn – “quite a significant commitment”. And Ireland has been kind to Coke.

The Irish soft drinks market is worth about €850 million in retail sales and grew 5 per cent in value in 2017: Coca-Cola has a 32 per cent share. Coca-Cola, Fanta, Sprite, Schweppes and the still fruit drink brand Oasis lead a portfolio that has served the company in sparkling stead.

“But times change,” Woods acknowledges. “There’s a growing realisation, a recognition, in the company, that consumers want more choices. The vast majority of our portfolio in Ireland is carbonated,” he says. “A lot of people love those drinks, but there’s a whole group of people who want something else.”

Will they want iced tea? Coca-Cola began 2018 by extending Fuze Tea, the “billion-dollar brand” star of its global portfolio, to 10 European markets including Ireland. Two variants, peach hibiscus and lemon lemongrass, have muscled their way onto Irish shelves.

Fuze Tea may smell a lot like Coke, but it represents a “very different consumer need-state”. While most soft drinks are consumed on relatively upbeat occasions, the marketing campaign for Fuze Tea stresses the opposite: “It’s about pausing and taking a moment.”

Isn’t iced tea still considered a little newfangled in Ireland? “I think the younger you are, the less you think that way,” Woods says.

Next out of the delivery trucks here will be Adez, a dairy-free seed and fruit smoothie, more snack than drink, that comes in three flavours: coconut berry; oat, strawberry and banana; and almond, mango and passionfruit.

Coke, which bought the Argentinian brand from Unilever in 2016, is launching Adez in on-the-go packs and believes that this, plus the addition of fruit, differentiates it from the soy-based drinks that are used as milk replacements.

Last November, Coke also dusted off the Schweppes brand, tapping into the swelling consumer interest in gin and an accompanying “premiumisation” of mixers. “We were trying to think of the right way to approach it, and the more we looked at it, the more we thought we actually have this fabulous brand called Schweppes, which had in many ways been the sleepy brand in the portfolio.”

Four new mixers under the Schweppes 1783 tonic water brand were unleashed, with the range designed to be matched to various spirits, not just modish gin (a salty lemon one is marketed as “the ideal accompaniment” for tequila, and so on).

Irish people have never quite taken to cherry-flavour Coke (which has come and gone in the “classic” incarnation here more than once), but cherry is “a big part of the business” elsewhere, “even across the water”.

It all adds up to a busy spell for Coke in Ireland and Britain, with Woods attributing the pace of change to a new corporate culture under James Quincey, the Coca-Cola Company’s chief executive since May 2017. Pretty much everything Coke does under Quincey and a strategy dubbed “Beverages for Life” is intended to lessen its reliance on the brand with its “name above the door”.

“Many people would say Coke is quite a conservative business,” says Woods. Now it has been imbued with “a desire to move faster, to be in more in tune with the consumer, to act quicker and bring things to the market faster than we have in the past”.

A more prosaic impact from the sugar tax, which comes into effect in Ireland and Britain on April 6th, is that, while the zero-sugar varieties have increased from 1.75l back up to 2l, “take-home” Classic Coke bottles are shrinking to 1.5l to take the edge off the 30 cent per litre levy. The 330ml can of Coke will be joined by a 250ml slimline version and a 375ml bottle, alongside the standard 500ml bottle (which should, by rights, cost 15 cent more).

“It has never been any secret that we don’t agree that the tax is necessary or that it will meet its policy goal of reducing childhood obesity,” says Woods. “I don’t think we have ever been unclear about our point of view on that. It’s a complicated problem and a soft-drinks tax on its own does not fix childhood obesity.”

Now that it’s too late to stop it, however, might a touch of sanguinity have crept in? “The broader picture for me is that the tax is coming, but there’s a whole lot more coming from Coke,” says Woods.