Family-owned restaurants to open new bar and a food hall 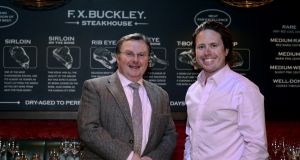 Des and Stephen Buckley at FX Buckley restaurant on Pembroke Street. The father and son are planning to expand the group’s footprint in Dublin city centre. Photograph: Cyril Byrne

It’s a bustling weekday lunchtime in the flagship FX Buckley’s restaurant outlet on Dublin’s Pembroke Street, and its father and son proprietors, Des and Stephen Buckley, and I are tucked into a corner booth.

Our waitress arrives over, brandishing a large chopping board adorned with half a herd of raw cow for us to choose from – sirloins, fillets, rumps, rib-eyes, and a T-bone the size of Croke Park.

FX Buckley’s, with its long heritage of association with the extended Buckley family’s separately-owned butchers chain of the same name, is unabashed in declaring its identity: this is most definitely a steakhouse. Here, you meet for meat.

Yet it wasn’t always this way. Des, the managing director of the five outlet-strong chain of family steakhouses and bars, says that when the last crash came in 2008, the business had lost its identity.

“We didn’t understand our business very well,” he concedes, somewhat disarmingly. “It was only in 2011 when we brought in consultants that we realised we had an absolute gem of a brand. But we weren’t using it properly. We had thought we were a restaurant chain. It was only in 2011 we recognised we were really a steakhouse. We became focused and the job got so much easier.”

The operations director of the chain, Stephen, who celebrates his 36th birthday later this month, describes its then-identity dilemma even more bluntly than his father: “When the recession hit, we were nothing.”

The FX Buckley’s restaurant chain, which now employs 170 in its outlets across the city and turns over €12 million, returned to its meaty roots and is now growing strongly.

Next month it will open an adjacent new bar for customers of its Pembroke Street eatery, after acquiring the Georgian house next door. It has also acquired a premises around the corner on Baggot Street, where it plans to open a retail food hall by the end of the year, subject to planning permission.

“The plan is to open a shop to showcase all the fresh products we buy in the restaurant,” says Stephen. “We’re constantly sourcing the best raw ingredients: meat, fish, pastas. vegetables and breads.”

The extended Buckley clan is one of Dublin’s best-known business families. Untangling the byzantine ownership structure of their various interests is like straightening out a bowl of spaghetti.

The genesis of the restaurant chain and the separately owned retail butchers outlets lies in the first FX Buckley butcher’s shop opened in 1930 by Francis Xavier Buckley on Dublin’s Moore Street. His father, John, had previously owned a butchers that was name-checked in James Joyce’s Ulysses.

Francis Xavier went on to open a chain of FX Buckley’s butchers across the city, and six of his sons, including Des, plus one of his daughters, eventually became involved in the business. The family’s interests grew to encompass ventures such as the Killiney Court hotel and, in the late 1980s, it entered the restaurant game with FXB’s on Pembroke Street.

Most of Francis Xavier’s sons went straight into the business from school, but Des, with the support of his mother, went to Rathmines College to study business.

“The family had an ethos of work,” says Des. “Dad usually asked his sons at 18 to enter the business, but I was the third youngest and somehow I escaped to college.”

He later became a bookkeeper in the family firm before working in sales in a meat supply joint venture. That was subsequently bought out by Avonmore, which he joined for a while following the deal. He arrived back into the family business in 1998, with a brief to assess the financial viability of the Buckley family reinvesting in the Killiney Court.

Two years later, the family sold the hotel instead to meat processing tycoon Bert Slaney for a sum reported to be about €13 million.

“We were a big family, and a big payment like that gave us the opportunity to divide up all the family businesses among us. The family broke down the consideration we received for the hotel, and everyone went their own way.”

Des ended his interest in the chain of retail butchers, which was split between some of the other brothers, and ended up owning the restaurant outlet on Pembroke Street, at that time branded FXB’s.

It was 2000 and, by then, his son Stephen had entered Shannon school of hotel management with a view to eventually joining his father in the restaurant trade. He left college without completing his final year, and rejoined the family business around 2004.

When Des took over FXB’s, it was just “ticking over”, despite the Celtic Tiger swirling around it. Still, he had a plan to expand and took a lease on a second restaurant in Temple Bar. In 2003, he added the Castle Inn pub near Christchurch, with his brother Tommy from the retail butchers as a 50/50 partner. The brothers then bought the landmark Ryan’s pub on Parkgate Street, near Heuston station, in 2004.

When Stephen entered the business at around this time, FXB’s was still just treading water despite expanding its footprint.

We can control our entire meat supply right down the chain

“Eight or nine years before, it would have been good. But here we were with a boom happening, and we weren’t really taking part in it,” says Stephen.

After the recession hit, the Buckleys bought the freehold for the Pembroke Street venue in 2009, again with Tommy as partner. Later, in 2013, Des was to add another venue, in Monkstown, bought outright, without Tommy.

In total, Des and Stephen now own two outlets – Monkstown and Temple Bar – outright, while three others – Pembroke, Ryan’s and the Castle Inn (now known as the Bull & Castle) – are owned jointly with Tommy. All five are operated by Des and Stephen, along with Stephen’s brother, Brian.

When recession hit, Stephen’s entry into the business a few years before was to prove crucial to FXB’s future change in direction. Des had stepped back from day-to-day control, and Stephen travelled to New York and other major cities, where he observed a casual dining steakhouse phenomenon that the group would later ape.

When the consultants in 2011 suggested refocusing on its links with the meat trade, Stephen embraced the idea and drove the operational change throughout the business. It rebranded to FX Buckley’s Steakhouses & Bars, emphasising the heritage of its links to the meat industry.

Another uncle of Stephen’s, Harry Buckley, owned a meat processing facility. He installed a dry ageing facility in that plant and exclusively supplies that meat to the restaurant chain. Stephen also pioneered the installation of meat display cabinets in the restaurants, so that customers could watch some of the meat ageing in the venue.

“We can control our entire meat supply right down the chain,” says Stephen.

He brought in new wood-chip ovens to give the meat a distinctive flavour and the group developed wine lists to go with the steaks. The restaurants also started selling craft cocktails. Service standards were brought up to scratch.

The rebrand, which cost more than €1.5 million, paid off. The business has grown more than 50 per cent in the seven years since the refocus on its steakhouse heritage. Group operating profits are now touching €1.2 million.

“The new bar next door will showcase Irish spirits,” says Stephen. “It will have a Georgian look and feel, with fireplaces and comfortable seating. The aim is to hold on to customers after their meal when, before, they might have moved on to another bar.”

He believes, however, that there is little further scope for opening more FX Buckley steakhouses in Dublin, and he doesn’t want to expand outside the city, or into the frothy hotel industry. The proposed new food hall was an alternative option for the family to expand the group’s footprint with a different, on trend, format.

Although he runs a business with his father and brother Brian, who takes care of stock control and staffing, Stephen says they don’t talk shop at home. “In a family situation, we try to keep business out of it. We try not to discuss it over Sunday dinner.”

Still, this is a family business, and the Buckleys are a business family. Stephen now has a six-month-old son, whom he and his wife named Francis Xavier, a nod to where it all started.

“Is he the first new FX Buckley to be born in the extended family?” I ask.

“No,” replies Stephen with a smile. “He’s the fourth.”