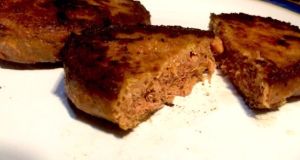 The meat industry is seeking a European Union-wide ban on use of terms like ‘vegan burger’ and ‘veggie sausage’.

The meat industry is seeking a European Union-wide ban on use of terms like “vegan burger” and “veggie sausage” in votes that are expected to take place on Friday.

The European Parliament is set to vote on two amendments that would prevent the use of meat and dairy terms for plant-based foods on supermarket shelves and restaurant menus.

The powerful farming lobby has argued that such terms confuse consumers and do not respect the work of the livestock sector. It has suggested alternatives, including veggie “disc” and “tube”.

The move comes amid growing popularity for such vegetarian and vegan products among environment and health-conscious consumers, with an increasing range of meat-free burgers, mince and meatballs appearing on supermarket shelves across the continent.

“Names... that are currently used for meat products and meat preparations shall be reserved exclusively for products containing meat. These designations include, for example: steak, sausage, escalope, burger, hamburger,” the meat lobby amendment reads.

Foods that contain no milk could not be likened to dairy products, under a second amendment, which would prohibit terms such as “substitute butter” or “yoghurt style”.

The farmers association Copa-Cogeca has blanketed the Brussels metro with advertisements in support of the proposed change that read “ceci n’est pas un burger” (this is not a burger) in a play on the famous artwork by René Magritte, and has called meat and dairy names for vegan foods “surrealistic”.

France backs the measures and passed a similar law domestically earlier this year. Terms like “soy milk” or “vegan cheese” are already banned across the EU.

A group of plant-based food producers and supporting groups including Ikea, Unilever and the European Vegetarian Union have formed an alliance to push back against the plan.

“These amendments would strongly hamper the further development of innovative, plant-based foods that have a key role to play in enabling citizens to make healthier and more sustainable food choices,” the European Alliance for Plant-based Foods said in a statement.

MEPs, who are divided on the issue, are due to vote on the proposals on Friday. If approved, the proposals would still be subject to negotiations with member state governments before being finalised.

A 2019 survey of the public by consumer organisation BEUC found that only 20 per cent of respondents objected to the use of meaty names for vegetarian foods, with a clear majority saying they did not mind the practice.