How to make Michelin-starred spaghetti in 10 minutes

The Daily Dish: Keelan Higgs has been eating this spaghetti Alfredo since he was a child; now he is serving it in his Michelin-starred restaurant Variety Jones 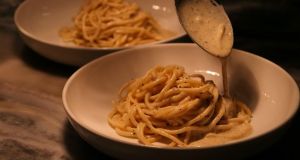 I can’t remember a time in my life when I didn’t know what spaghetti Alfredo was. When I was a kid, my dad used to make for me and I never forgot it. As a young chef, I kept unsuccessfully trying to recreate it the way he made it. But eventually I cracked it and this is the recipe.

When I opened Variety Jones, it was only natural to put a version of it on the menu. It’s a perfect example of how cooking can be so simple but deliver so much. It uses just five basic ingredients that everyone has in the kitchen, or can get hold of easily.

This is a really simple recipe to make, from start to finish it takes about 10 minutes. Perfect for times when the cupboard is (almost) empty and you don’t have a lot of time to cook.

Alfredo has been on our menu almost from day one and has become a signature dish. I don’t think it’ll ever come off. It really is one of my favourite things to eat.

How to cook it:

1. Fill a pot full of water, add two tablespoons of salt and bring it to the boil.

2. Drop the spaghetti in and stir a few times to make sure the pasta doesn’t stick together. Depending on the brand of pasta, the spaghetti should take six to eight minutes, you want to serve it al dente, or with a slight bite to it.

3. In the meantime, put a pan on a medium heat and add the black pepper, move it around for a few seconds, you should start to smell the pepper a bit as its natural oils are released.

4. Next add the butter and a good three to four tablespoons of the water the pasta is cooking in. Allow the butter to melt and stir, so it emulsifies with the water. Add the cream and bring to a simmer for 30 seconds or so then turn the heat down and add the grated cheese. Stir the sauce until the cheese has melted. At this stage the pasta should be just cooked.

5. Strain the pasta and add to the sauce, toss the pasta in the sauce until well mixed in. If you feel the sauce is too thick add a spoon or two more of the pasta water.

6. Serve in a bowl topped with more grated Parmesan and a twist of black pepper.