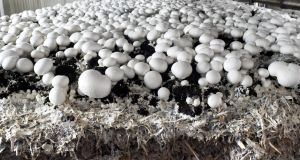 Donegal Investment Group is in line for a €45 million windfall after settling a long-running dispute over the price of its exit from Monaghan Mushrooms.

Donegal Investment Group is in line for a €45 million windfall after settling a long-running dispute over the price of its exit from Monaghan Mushrooms.

The sale of its 30 per cent stake in Monaghan Mushrooms is a boost to the 1,900 mainly farmer shareholders in the group formerly known as Donegal Creameries.

The figure is considerably higher than a €26 million valuation put on the shares by the High Court during a four-year legal dispute between Donegal Investment Group and the majority shareholder in Monaghan Mushrooms.

The Donegal group is now set to convene an extraordinary general meeting in December to secure shareholder approval for the sale of its share in Monaghan Mushrooms.

This is the company’s second major disposal of a non-core asset this year following the deal in July when it sold the 1,300 acre Grianán Estate in Burt, Co Donegal, for €17.425 million to agriculture and renewable energy group Glenmore Estate.

Donegal Investment Group originally took a complaint of shareholder oppression against the majority shareholder of Elst, the holding company for the mushroom business. That company, Danbywiske, is owned by Monaghan Mushrooms’ founder Ronald Wilson.

As a result, Danbywiske was ordered by the High Court to buy out Donegal Investment Group’s interest. However, the Donegal company had appealed the court valuation of the stake at €26.3 million.

In a statement to the Irish Stock Exchange, on Thursday, the company said that it had reached a settlement of its shareholder oppression claim. It said the sale of the shares is expected to take place before February 15th next year.

“The outcome is good for Donegal shareholders, and it will certainly change the liquidity of our balance sheet,” he said, adding: “We are very confident that this will be accepted by our shareholders.”

Donegal Investments has operations across Ireland, Britain, the Netherlands, France and Brazil. It is engaged primarily in the seed potato business as well as organic produce, animal feed and dairy products. It also has interests in the rental and sale of agrifood property assets.

Donegal Investments was re-branded in 2013, after selling off its Donegal Creameries milk and agri-business the previous year.