Move offers Irish brand, founded in 2016, the chance to enter the lucrative US market 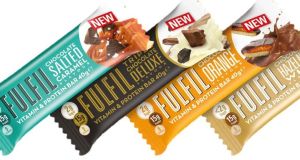 Fulfil has been doubling its sales each year and industry sources expect it to deliver consumer sales of close to €100 million this year.

The move is seen as part of a strategy by America’s largest chocolate and snacks brand to expand its presence in a European market where it is currently poorly represented.

But it also suggests a likely future assault on the US market by the tightly-held Irish company which was founded only at the start of 2016.

Fulfil has been doubling its sales each year and industry sources expect it to deliver consumer sales of close to €100 million this year.

That would make it the second largest confectionary brand in Ireland by sales behind Cadbury/Mondelez.

The company, in which businessman Barry Connolly is majority owner, has been pursuing an ambitious policy of expansion into new markets. It entered the United Kingdom last year and is also selling in Australia, the Netherlands, Belgium and even in Iceland.

However, it has not, as yet, targeted the US market.

Chief executive Brian O’Sullivan, an industry veteran who spent a decade at Cadbury Ireland before moving on to a global position with parent with Mondelez, was among a number of industry heavyweights brought on board to oversee the company’s aggressive expansion following the initial success of the company, which was a finalist in the Irish Times Innovation Awards in 2017.

A high-profile UK launch last year has seen Fulfil attract a number of approaches from private equity houses, according to finance industry sources. It also appears to have brought it to the attention of Hershey.

US-listed Hershey, which is controlled by a family trust, generates almost 90 per cent of its sales in North America. Its international operations are focused mostly in South and Latin America, where it has manufacturing businesses in Mexico and Brazil, and in Asia where it manufactures in China, Malaysia and India.

Europe accounts for only a very small part of an international business in which sales overall have been falling over recent years. Markets outside North America account for just 11 per cent of total Hershey sales and just 3.5 per cent of profits.

The company first established a European operation only in 2010 but remains a insignificant player in the European confectionary market.

With its high protein, low sugar nutrition products and rapidly rising market profile, Fulfil is seen as an attractive investment in a snacks market that is moving to adapt to a demand from consumers for healthier snack options.

Mr Connolly took control of the business this time last year, buying out founders Niall McGrath and Tom Gannon following a dispute over how aggressively to pursue international expansion.

Mr McGrath and Mr Gannon, who had previously worked with Mr Connolly’s Richmond Marketing, had each held a 25 per cent stake in Bartoni, Fulfil’s parent company, with Mr Connolly holding the other 50 per cent through an Isle of Man company Vetranio.

AIB bank came on board as part of that refinancing, taking a 25 per cent share of the business in a transaction that valued Fulfil at about €40 million.

Industry sources say that the Hershey deal marks a significant step up in that valuation for the business.