Beyond Meat shares heat up as KFC tests plant-based ‘chicken’ 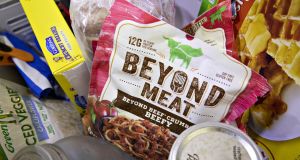 Beyond Meat has partnered with other big chain restaurants including Tim Hortons, Subway and Dunkin Brands as restaurants respond to consumers’ changing diets

Shares in Beyond Meat rose on Monday after KFC said it would launch a plant-based alternative to chicken, in the form of nuggets and boneless wings at a restaurant in Atlanta.

Beyond Meat shares rose 5 per cent to $154.35 after KFC said it will begin testing the Beyond Fried Chicken nuggets and wings on Tuesday, and customer feedback from the test will then be weighed up by KFC as it evaluates a broader test or national rollout.

“KFC Beyond Fried Chicken is so delicious, our customers will find it difficult to tell that it’s plant-based,” said Kevin Hochman, president of KFC US.

Beyond Meat has already partnered with other big chain restaurants including Tim Hortons, Subway and Dunkin Brands as restaurants respond to consumers’ changing diets, but thus far its offerings have been limited to plant-based alternatives for burger, sausage and ground-beef substitutes.

With growing vegan, vegetarian and “flexitarian” diets – those that only occasionally eat meat and fish – packaged foods companies are launching into the plant-based meat market as well.

Some analysts have predicted the market for plant-based meat could be worth as much as $100 billion in 15 years. Beyond Meat’s burgers taste and feel like meat but are made of yellow pea protein, vegetable starches and other ingredients.

Pea-protein consumption volumes have almost doubled to 275,000 tonnes from 2015, according to Henk Hoogenkamp, a protein technology adviser to food companies. He forecasts the market will grow another 30 per cent in 2020, rising to 580,000 tonnes in 2025.