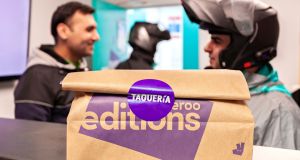 Deliveroo plans to launch its “editions” service in the Republic this year.

Food delivery service Deliveroo has launched its “virtual brands” concept in the Republic, a system whereby restaurants can set up and run multiple food offerings from their existing premises.

Having successfully rolled out the feature across other markets, Deliveroo formally launched the service in Ireland on Friday to allow restaurants “fully utilise existing premises and cut down on food waste”.

For example, a restaurant with a buoyant dinner trade but poor lunch trade could launch a parallel brand to service the lunch market. The structure has the benefit of running a new food offering out of the same kitchen with food prepared by the same chefs, but under a different brand name.

The London-headquartered service said in other markets, restaurants that have participated witnessed a 75 per cent increase in order volumes. It added that 84 per cent of customers ordering from the virtual brand have never ordered from the original restaurant’s menu, highlighting that the service can open new revenue streams.

Dan Warne, Deliveroo’s UK and Ireland managing director, said the company can identify opportunities by analysing specific markets where popular cuisines are missing or undersupplied but where demand is increasing.

“Because of this we expect to create hundreds of virtual brands in Ireland in 2019,” he said, adding that “the advantage for restaurants is the low risk and low cost involved in establishing a second brand using existing chefs, space and ingredients.”

The process for establishing a virtual brand will see Deliveroo partnering with restaurants to come up with a concept, design and brand launch.

Privately held Deliveroo last year announced plans to launch its “editions” service in the Republic. Under this service, Deliveroo sets up a number of kitchen facilities at one location, allowing food companies to have a base from which to cook food for delivery to nearby customers.

Typically, the food companies do not pay rent or business rates, but pay higher commission to Deliveroo for using the service. The company’s commission otherwise ranges between 20 per cent and 30 per cent of the total cost of a meal. Separately on Thursday, competitor UberEats, meanwhile, said it is reducing the commission it charges to restaurants to 30 per cent, aiming to take a bite out of Deliveroo and Just Eat’s market share.

6 SSE to spend up to €6bn building offshore wind farms