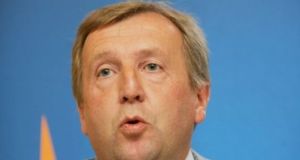 Farmers had been warning about an impending shortage since September 2017, according to Charlie McConalogue, who said Mr Creed’s “blatant refusal to act in advance has led farmers nationwide into an emergency situation where fodder reserves are fast running out.”

The fodder crisis affecting farmers has worsened in recent days, according to the Irish Farmers’ Association. It has said there is insufficient fodder of the necessary quality in the country to resolve the feed shortage.

In a statement on Thursday, Mr McConalogue criticised the Minister for not publishing the details of the transport subsidy scheme, which was planned to assist with importing fodder.

“There is a degree of confusion among farmers, co-ops and fodder agents as to who is eligible to avail of the subsidy, how to go about accessing it and what it entails,” he said, adding that Mr Creed must now outline a clear plan to deal with the crisis.

Earlier on Thursday, Mr McConalogue told RTÉ’s Today with Sean O’Rourke show that Mr Creed is now “trying to catch up” with the issue. He said Mr Creed “should have taken action in advance, now we’re dealing with an emergency.”

Mr McConalogue said the Minister should have been encouraging the use of cereal-based foodstuffs from an earlier stage, to stretch existing stores of fodder.

“The Minister got it totally wrong,” he told the programme. “It’s crucial that he be clear about what support is going to be given.”

Mr McConalogue called for a low interest loan scheme to allow farmers get through the next few weeks, along with a meal voucher scheme, as low income farmers will need assistance.

The Minister needs to “step up”, he said, adding that his focus must be on dealing with this issue

Mr Creed defended his actions on the same programme, saying he had been engaging with the co-ops for some time and they knew what financial assistance was available.

He dismissed the accusation that plans should have been put in place earlier in the winter to import fodder, saying that would not have been appropriate.

“Somebody who didn’t have a problem three weeks ago could be having a problem with fodder today,” said the Minister.

“At all times our response has been measured and appropriate. It would have been absurd to import fodder last September or October when it might not have been needed.”

It is now necessary to take appropriate measures for post-two weeks’ time, he said. Support is available and farmers need to put up their hands if they need help.

“There is no need for any animals to die. I urge farmers, this is no the time to be shy about looking for help.”

1 Fianna Fáil may have just pressed the pause button on the property market
2 Who are Ireland’s 17 billionaires?
3 Saudi prince’s WhatsApp account ‘directly involved’ in Bezos hack
4 Corporate tax change is inevitable, says Donohoe
5 Irish organisations struggle to comply fully with GDPR
6 New blow for Ted Baker as accounting scandal doubles in size
7 My father in a nursing home wants to gift me his house
8 European investor acquires Harcourt Road offices for €55m
9 Are there annual limits on inheritances or gifts to a child?
10 Dublin 11 industrial land with scope for 600 homes seeks €6.5m
Real news has value SUBSCRIBE