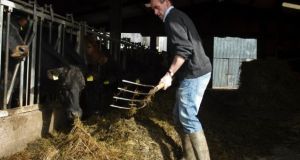 Pat Murray, of Knocknagapple, Monaseed, Co Wexford is one of the many farmers finding it difficult to feed their livestock. Photograph: Garry O’Neill

The fodder crisis affecting farmers has worsened in recent days, so much so there is insufficient fodder of the necessary quality in the country to resolve the feed shortage, according to the Irish Farmers’ Association.

Minister for Agriculture Michael Creed has acknowledged supplies of hay, silage and straw are “tightening,” necessitating the importation of feed.

His officials are developing a scheme “supporting the importation of fodder from outside the country, details of which will be worked on in the coming days”, he announced after meeting representatives of Teagasc farm advisory body and co-ops.

Already some co-ops have secured fodder from abroad which will be available from Thursday.

IFA president Joe Healy said the Minister’s announcement that he would subsidise importation of fodder was welcome but should have been in place before now.

The IFA has spelled out a number of practical actions the Government should take in addition to those announced to alleviate the stress for farmers, including the introduction of a meal voucher system for livestock, and suspension of farm inspections.

The easing of the 100km rule in the fodder transport scheme was “an attempt to resurrect a failed scheme that is tied up with too much red tape”, Mr Healy added.

Stressing there was no simple solution to the current shortages, Mr Creed called for a collaborative effort to support affected farmers and ensure adequate feed supplies were available until livestock can be turned out to graze.

The Minister called on farmers who still had supplies, to continue to make these available to neighbours through local groups, co-ops and Teagasc through the department’s recently developed fodder register. Meetings are being arranged between the minister and the main banks to discuss steps to alleviate the short-term financial pressures on farmers.

Fianna Fáil agriculture spokesman Charlie McConalogue said the Minister’s delayed response added to the severe conditions affecting farmers. “Despite warnings from my party and farm organisations as far back as September last year, the Minister ignored farmers and failed to take any concrete action to address the situation.”

Dairygold co-op said fodder it was bringing in from the UK would be sold at cost to farmers. Its chairman John O’Gorman said it had been monitoring the situation through first hand information from members and suppliers and was helping to locate fodder where shortages were arising.

LacPatrick co-op, which operates on both sides of the Border, said it was deploying a “silage matchmaking service” linking farmers short of feed and those with ample supplies, which had seen a strong uptake. It had also secured 4,000 tonnes of maize silage which is being offered to its suppliers.

Head of LacPatrick’s farm advisory team Dr Paul Crosson said: “For many farmers the winter started last August and there has been little or no improvement in the situation. While farmers in this part of the country would plan for a long winter, the current situation is beyond anyone’s best planning.”

Dr Cara Augustenborg of Friends of the Earth Ireland said the fodder shortage indicated the Government needed to face up to the consequences of climate change combined with extreme weather on Irish farming.

If co-ops wanted to continue to exist in the long term, they needed to bear in mind that “climate change is now upon us and begin to future proof their farmers through diversification of income sources, so another fodder crisis or extreme weather event doesn’t put them out of business”.

1 Pilita Clark: When a rude boss keeps you waiting, why not walk out?
2 Comcast acquires Irish cloud-based telco Blueface
3 Henderson Park seek €400m+ for prime Dublin office blocks
4 Five things to watch out for in Apple’s earnings
5 Money matters: ‘My father embarrassed us with his haggling’
6 Opioid executive admits to ‘no morals’ ahead of prison term
7 US threatens retaliation against EU over proposed carbon tax
8 Irish-founded ‘kid tech’ company SuperAwesome gets Microsoft backing
9 Little strategic thinking in election manifestos of Fine Gael and Fianna Fáil
10 Are there annual limits on inheritances or gifts to a child?
Real news has value SUBSCRIBE