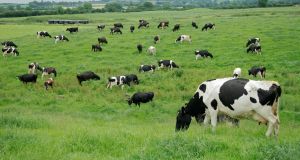 Land prices in the State have risen to their highest level in three years, according to the Irish Farmers Journal annual Agricultural Land Price report.

The national average land price in the Republic last year was €9,088 per acre, up 3.61 per cent on the previous year, as the total value of transactions increased 5 per cent to €313 million.

Prices increased across 19 counties, with Kildare the most expensive at €14,020 per acre, while seven counties saw a price fall, with Leitrim the least expensive county for land at €4,586 per acre.

The report noted that business people, or non-farmers, were investing in land as an asset, while private investors and pension funds had made a play into the forestry sector.

The report suggested dairy was a significant driver of land prices last year, while land for tillage, beef and sheep farmers lagged behind.

As to why institutional capital was making a play into forestry, the Irish Farmers Journal noted that it offered a tax-free income when trees were cut down and had lucrative annual premiums of around €560 per hectare. “The reality for farmers in this instance is that competition is heavily increased,” it said.

On the business front, the relative stability in the market had encouraged business people to invest, the report said. It suggested Frank Dunne, of Dunnes Stores was behind one significant land sale, namely the sale of Ballymacoll Stud in Co Meath for €8.15 million in June last year.

Meanwhile, it was flagged that supply in the market still remained tight, totalling 78,350 acres, up 6.2 per cent on 2016. The Border counties in particular had land reductions, potentially linked to concerns surrounding cross-Border trade.

Additionally, just 47 per cent of properties offered for sale at auction were sold under the hammer, with some sellers reportedly having unrealistic expectations on the value of their land.

The report also looked at the leasing market and found the average price for leased land was €196 per acre in 2017, with dairy farmers in particular willing to pay “top dollar” for land. That, the report suggested, was leading to a rise in prices in certain areas.