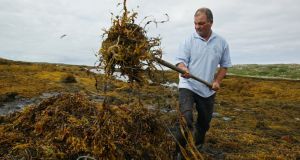 The Government aims to “clarify” the legal situation on wild seaweed harvesting rights within the next two months, Minister of State for Planning and Local Government Damien English has said.

Mr English was commenting after he held discussions in Carna, Co Galway, on Friday with seaweed harvester representatives who are concerned about possible loss of access.

Canadian company Acadian Seaplants, which bought out State seaweed company Arramara Teo for an undisclosed sum in 2014, is one of a number of applicants seeking harvesting licences on shoreline extending from north Clare to west Mayo.

However, Mr English has said some 17 applications in total, “most of which are by companies”, were “effectively on hold” until his department can “bring clarity to the regulatory regime”.

Community group Coiste Cearta Cladaí Chonamara, which had sought the meeting with Mr English, is concerned that traditional rights and local employment could be restricted if companies are licensed directly. Individual harvesters would normally have supplied Arramara in the past.

The group’s spokesman, John Bhaba Jeaic Ó Conghaíle, said that while Mr English had given no specific commitment, the meeting was “very constructive”.

In a recent interview with the Connacht Tribune, Acadian Seaplants president Jean-Paul Deveau said that a guarantee of supply to Arramara Teo was vital for future success of its business and this was why it had applied for harvesting licences. He confirmed that his company would have sole rights to any seaweed harvested for sale inside an area licensed to it.

Mr Deveau also warned that the Connemara seaweed industry could be seriously damaged by any price rise. Arramara recently increased its price to harvesters by almost €10 to €53 a tonne, but this is said to have been matched by two other companies.

Mr English said he would be meeting other groups and was “very conscious of the role played by seaweed harvesters up and down the west coast of Ireland over many generations” and the” positive economic contribution which their efforts have made to their communities”.

“I also respect the heritage of seaweed harvesting and the way in which they have protected and safeguarded the resource through sustainable harvesting practices,” he said.

A Private Members’ motion by Galway West Independent TD Catherine Connolly, recently carried in the Dáil, called on the Government to advance and promote “sustainable development” of the seaweed sector.

Her motion noted that a 2015 report by the Oireachtas Joint Committee on Environment, Culture and Gaeltacht had called for a national strategy to develop a sector currently valued at €18 million, with higher value potential in the health food, animal probiotic, high-value fertiliser, cosmetic and therapy sectors.

About 40,000 tonnes of seaweed is harvested in Ireland, more than 95 per cent of it naturally grown.

1 Michael O’Leary is the boss you want to lead an airline out of crisis
2 European commission to appeal against €14.3bn Apple tax ruling
3 Fortnite owner signs multimillion deal to buy Irish ‘kidtech’ firm
4 Online shopping makes town centre jobs unviable, says Next boss
5 Workvivo to create 100 new jobs in Cork as business booms
6 Irish company to test vaccines on volunteers deliberately infected with Covid-19
7 Dunnes Stores set to enter grocery delivery market
8 Should I switch bank now with Ulster Bank at risk of closing?
9 Ireland is in danger of losing the woods for the trees on emissions reduction
10 The wealth of the Irish – how do your assets match up?
Real news has value SUBSCRIBE