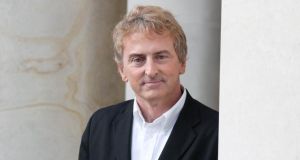 SOSV founder Seán O’Sullivan: “Food and agriculture are areas that SOSV has been particularly active in.” Photograph: James Horan/Collins

This small but fast growing segment of the start-up world, which covers companies that are aiming to disrupt the global food and agriculture industry, rebounded last year after declining in 2016 when financing fell by 9 per cent to $7.8 billion.

More than $10 billion was invested in more than 900 deals worldwide in 2017, with investment growth up 29 per cent.

The deal count in Ireland doubled year on year to 19, according to the figures from Agfunder. The online VC platform suggested the increase was due to increased participation in the market from players. This includes the likes of the Ireland Strategic Investment Fund, which last year invested $40 million in Finistere Ventures-managed agritech funds. Half of that was put into a dedicated Irish fund.

The introduction of a dedicated accelerator programme at Dogpatch Labs by Alltech founder Dr Pearse Lyons, who died last week, has also encouraged more start-ups into the segment.

The sector is considered to be a high-potential one for Ireland, given its track record in both agriculture and technology. Start-ups such as Moocall, MagGrow and Cainthus are among a number of companies making waves worldwide.

SOSV, the early-stage venture capital firm, established by Mr O’Sullivan, who previously founded MapInfo, was named as most active investor with 41 deals covering everything from bioenergy and biomaterials to restaurant tech. SOSV was also named the top farm tech investor worldwide.

The firm, which also counts CoderDojo co-founder Bill Liao as a partner, has funded more than 500 early-stage starts-up since it was established, and is currently funding more than 150 firms a year through its accelerators, which cover areas such as hardware, software biology, food, robotics, medical devices, transportation and green energy.

“Food and agriculture are areas that SOSV has been particularly active in, and some of the biggest investors in the world have followed us into the areas that our programmes like Food-X, RebelBio and IndieBio have pioneered,” Mr O’Sullivan told The Irish Times.

“Over $150 million in smart money from investors like Bill Gates, Cargill, GV [Google ventures], Nestlé, Khosla, KPCB, Temasek and others has been put into SOSV companies in the past two years in new sectors like cellular agriculture, nutraceuticals, connected kitchen appliances, and more. Several of these companies will become household names in the coming years,” he added.

RebelBio, the world’s first life-sciences start-up accelerator programme, which runs in Cork is among SOSV biggest successes. Perfect Day (formerly Muufri), one of the first start-ups to go through the programme, recently raised nearly $25 million (€20.9 million) as it seeks to bring its synthetic animal-free milk to market.